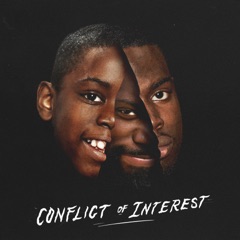 “This is a journey.”

“My biggest fear with this album is that people consume it like a compilation,” Justin Clarke—better known as Ghetts—tells Apple Music. “Just looking at the tracklist and spotting features, thinking that they can jump the tracks. This is a journey. It makes complete sense when you listen to it the way it’s supposed to be listened to.” For the east London rhymer—whose early story was one of countless pirate radio sets, sticky rave rooms and viral freestyles—the fight to be heard and respected on his own terms is nothing new. Conflict of Interest dropped with Ghetts aged 36 and only his third studio album in a career that burst into life through cult early 2000s DVD series Risky Roadz. But this is one of grime’s most prolific, impactful and interesting artists. The teenage Ghetts (originally performing under “Ghetto”) helped embody the new scene and its infectious, unpredictable energy. A member of two seminal grime collectives (NASTY Crew and The Movement), Ghetts sharpened himself into a supremely versatile rhyming juggernaut, but somehow missed the mainstream acclaim afforded former teammates including Kano and Wretch 32 in the late 2000s. But as controversy, commercial limitation and censorship caught up with grime’s first wave, Ghetts was compelled to reclaim authorship of his story. “Tupac was a conflicted individual,” he says. “I felt that way for so long, too. I didn’t even understand my ting. I’m a black sheep in my family.”

On Conflict Of Interest, all sides that make the man are laid bare for the first time. It’s an exhaustive-and-exhilarating cycle through the cavernous reaches of the MC’s mind. “Where I’m at now is that everything has to sound amazing,” he says. Whether it’s warm, throwback flows on garage tempos (“Good Hearts”), brutally honest chronicling of a past life in petty crime (“Hop Out”), crossover hits-in-waiting (the Ed Sheeran-starring “10,000 Tears”) or long-awaited reunions with former adversaries (“IC3” with Skepta)), this is the complete record Ghetts has been threatening to pull together for two decades. “I’m not here to compete with people that just want to make microwave music,” he says. “I want to be taken in on a worldwide level.” Below, Ghetts walks us through its story, track by track.

Fine Wine
“Wretch 32 titled this for me, I originally had it as ‘Intro’. I brought him by the studio as I was wrapping up the project: he’s someone whose opinion I rate and he’s got a great ear. This one stood out to him immediately, and at the end he said to me: ‘You know what? Your ting is like just like fine wine...and that should be the title!’”

Mozambique (feat. Jaykae & Moonchild Sanelly)
“This is a little different to the single version—we added some strings on at the beginning here to give a more special feel to the sound, and get some flow to the sequencing. When you listen to this album—particularly the flow and feel of the first few tracks, it’s meant to feel continuous, like a set.”

Fire and Brimstone
“In a way I guess this track is about my PTSD. In some situations it still comes to me, like when I’m in the car and the feds pull in behind me. I’m moving nervous. I’m fully insured and there’s nothing in the car; I have a licence, but still, a bit nervous!”

Hop Out
“Writing this track was fun, running through my past life and all of my adventures. I’ve been noticing for a while now that nobody was really talking about other kinds of moves you could do on the roads. It wasn’t all about trapping in my days. Even though it’s all in my past, I’m being very real here, I’ll say that.”

IC3 (feat. Skepta)
“The fans have been asking me for this one for years! They really, really wanted me and Skepta to get one off together, after so long. I’m especially happy because we’re talking some real substance on this too. The clip at the end is taken from a set with Kano and Skepta on Logan’s [Kiss FM] show back in 2008. We’re all older, and Skepta and I are now fathers—but I always reflect on how we have such a long and deep history in this game together.”

Autobiography
“‘I know you’ve been through hell so I’ve got heaven for you/If you don’t tell your story they gon’ tell it for you.’ One thing about me: when I’m writing, I’ll just go with it and tell the whole story. It’s is the longest track [on the album] but the length is never that important to me. I had a lot to say here, so I said it all.”

Good Hearts (feat. Aida Lae)
“I had to have Mighty Moe [from Heartless Crew] open this track and he was kind enough to do so. I still remember seeing Heartless shut down Ive Farm—my first festival experience. It was just a tent in Leyton. It wasn’t even massive, but to a 15 year old, it kinda was. I saw Heartless going crazy in this tent in patterned Moschino outfits. They looked great and I remember the vibes in this place was like no other. I had this overwhelming feeling like this is what I want to do. Now, whenever I see or hear Heartless Crew—I’m not Ghetts—I’m that little boy.”

Dead To Me
“This song came about from an Insta live session I had. I was messing around at first, trying to get people to understand the levels. I asked someone to throw me a concept and I’d return in an hour, with the song done. People were telling me it was impossible but I came back in an hour with a finished track. The blogs started posting it up and eventually people pressed for it to make the album.”

10,000 Tears (feat. Ed Sheeran)
“Let’s be real: Ed is top three in the world. It’s Drizzy, Beyoncé, Ed. So when I wrote this track, I reached out to him and he turned around a verse in no time for me—that meant a lot. He loved what I was on and, honestly, to have one of the biggest artists in the world singing a chorus that I wrote is no small feat. I’m sure to the average, surface-level listener, they won’t believe it was me that wrote this song at first.”

Sonya (feat. Emeli Sandé)
“I wanted to write a song about escorts, but not from a male, judgemental perspective. I understand that in this life I’ve done things that can be judged harshly, so I’m not sitting here judging anybody. Are some of the things I’ve done for money in my life any better than escorting? In whose eyes? Who’s judging? That’s the perspective; I wanted to touch on subjects people are not speaking about on this album. And this is one of them.”

Proud Family
“When you’re putting together a solid body of work, I feel like you have to paint the full picture and that includes my family. This was one of the last tunes made for this album and it was the missing piece to the puzzle. I’m really tight with my family and making them proud means so much to me, on the day of filming this video with my them: my nan died. I had to shoot a block of videos the whole day and that was the hardest day of shooting I’ve had. I’ve never lost somebody as important to me as my nan, and my head was in such a weird space, but I was zoning in and found the strength to pull through. Now that I’m having my own children, I’m thinking about what I can do today that will affect my great-grandchildren—just experiencing a whole new range of feelings about family.”

Skengman (feat. Stormzy)
“Stormzy and I first worked together on [2017 album] Gang Signs & Prayer [for ‘Bad Boys’] but we also recorded another track for [2018 album] Ghetto Gospel: The New Testament. It just wasn’t levelling with ‘Bad Boys’ though, and I couldn’t bring myself to release it. It was sub-par. This time, I could feel I had something different. I was writing the track and forming the whole concept of the video in mind. I’m like, ‘Oh, this is crazy. And Stormz owes me a verse. Where’s Big Mike at?’ So, he’s come through, done the verse, and [album producer] TJ’s gone to work on post-production. If you listen carefully when Stormzy comes in, there’s a note going through it playing [2018 freestyle] ‘WICKEDSKENGMAN’.”

No Mercy (feat. Pa Salieu & BackRoad Gee)
“The studio session on this day was crazy, I’ve not had many sessions like that. The energy was wild. Pa is a lovely soul—he’s just one of those man you want to see win. As soon as I bucked him, it was like something that was meant to be. He told me that his friend was a big fan of mine, and once, when I was doing an open video shoot, they both pulled up. That was maybe three years ago. And that friend has now passed, but that’s something that I wasn’t even aware of and a nice moment for it came back full circle, for me and him.”

Crud (feat. Giggs)
“This was recorded in lockdown and, as soon as I made it, I could hear Giggs on it. He’s a man that loves music as much I do. We’re both so passionate about the art form of MCing. And we both gas our own ting equally! ‘I murdered that’: that energy. This might be our sixth or seventh track together. I’ve been working with the bro for at least 15 years now. And every time, we’ll argue about whose verse won on the riddim. For years and years after.”

Squeeze (feat. Miraa May)
“I’ll be honest. I couldn’t get from ‘Crud’ to ‘Little Bo Peep’ and make it make sense! Sonically, concept wise, I didn’t know how. For all of us involved in this album, we look at ‘Squeeze’ as an interlude—a long interlude—just to paint the picture and get us to the next track.”

Little Bo Peep (feat. Dave, Hamzaa & Wretch 32)
“I went round to my mum’s house and heard something playing from upstairs. It was my brother making a loop. It was kinda crazy and I was impressed. So I ran upstairs, laid down a quick idea and we slept on it for ages. After we made [Hamzaa’s 2019 single] ‘Breathing, Pt. 2’, I knew this was the right track to call on Hamzaa and Wretch 32. I wanted my own version, or something in that vein and they absolutely smashed it. The track’s about being led astray. You might be addicted to something and that’s your Little Bo Peep. You’re a sheep to that, whatever it is.”

Ghetts
Hip-Hop/Rap
6:32
2021-02-19
© 2020 Chartoo. Available on Apple Music. Last Updated on 01/03/2021, 05:05:40. Apple, the Apple logo, Apple Music, iPad, iPhone, iPod, iPod touch, iTunes, iTunes Store, iTunes U, Mac, and OS X are trademarks of Apple Inc., registered in the U.S. and other countries. Apple Books, App Store, and Mac App Store are service marks of Apple Inc. IOS is a trademark or registered trademark of Cisco in the U.S. and other countries and is used under license. QR Code is a registered trademark of Denso Wave Incorporated. All other trademarks, logos, and copyrights are property of their respective owners.
DesktopTabletMobile
Improve this translation
Preview provided courtesy of iTunes
Preview provided courtesy of iTunes