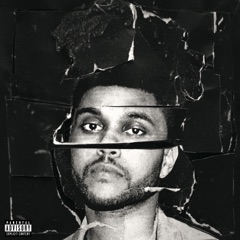 Beauty Behind the Madness

Earned It (Fifty Shades of Grey)

The Weeknd
6:17
£0.99
0
Was unimpressed by the poor quality.
S artsws ssVand t..1,[.{#[.? Cat -3s w Zs
❤❤❤❤❤❤
One of the best albums of the last 10 years. Absolutely incredible
this is one of my favourite rnb/soul albums of the last 12 months ...
This album is mad just like the old ones. Dope & Crazy
This album is lit. Prisoner is the best song on it, love Lana's verse 😍
This guy says just how and what I'm feeling thinking thank you Rachael
You won't regret it. It is ace.
A few good songs, a few very average ones.
Abel is a young god
iLoveWeekend
always 5/5
This album is pure gold - "often" and "losers" are just amazing!!🔥🔥
What an album! The weeknd really knows a thing or two! Greatly written tracks and you'll never get bored of listening!
I think it's a great album and highly recommend downloading it, it's drifted away from Trilogy and is a new chapter of music for a Abel but it can't be ignored🎧
Great album, love The Weeknd!!!
Love it all..
Blew my mind 💛
I first saw The Weeknd on TV, performing 'Can't Feel My Face'. So I went on iTunes and listened to a few samples of this album, and decided to purchase the album. Haven't stopped listening to the full album for over 2 months now. Fantastic vocals (clearly influenced by the King of Pop, Michael Jackson) and fantastic songs. I wonder what his next album will be like! :-)
A really good album! 🎵
This album is wicked from start to finish. Abel's voice is just amazing. Haven't stopped listening to it in over a month. Favourites are often, shameless and acquainted.
Hypnotised by this album what a voice amazing!!
Slightly disappointed with this album. Not my favourite out of all his work, but still some incredible music and vocals. It just feels like an album of singles compared to a complete whole souled album. Still in love with Trilogy and Kiss Land - they feel like enough at the moment
Not bad but not amazing!
This is the resurgence of R&B and music in general. There has been a lot of rubbish in the past 5 years or so in the music industry, especially in Hip Hop and R&B. This breaks that mould with a unique content of lyrics, smooth hooks and great singing. One of the best albums I’ve ever purchased. A must in anyone’s record collection.
Well done the weekend u have satisfied my life.
❤️
Amazing!!!!!
Mini michael💜💜💜💜💜
This is the best decision I have ever made, every song is amazing. Although some songs are very vulgar, his melody is incredible. Every tune and bee note this extremely talented man hits makes me not regret buying this unbelievable album
This is the greatest album I have listened to. His voice is amazing I could listen to him all day.
He sounds like Michael Jackson
totally hooked xXx
I love all the songs on this, hope the album goes number 1
awesome album!
What a great album! Listened to it a lot and still not bored of it!
The love tunes ain't never been my thing, but this cats on fire an he on point with all lyrics can relate to this album
Already have trilogy and kissland albums so had 2 complete the collection... Literally all his albums are all i listen 2 , he has a way of making 1 song turn in2 3 with all the dif parts to it i love this about his music ❤️❤️❤️
His voice 👌🏽😍
To be honest, I still prefer his original style of music [ie. songs like Often, Wicked Games etc.]) in albums such as 'Trilogy' and 'Kissland', compared to new releases such as 'Can't feel my face' where the track sounds more 'pop-like' instead of sticking to his usual, unique style of R&B.
I'm also still confused to why 'Girls Born In The 90's' was replaced with 'Acquainted' as 'Girls Born In The 90's' was a much better song!
Although I'm not saying the album is bad or whatever (don't get me wrong, it's great!) - Im just saying that I prefer The Weeknd's older style of music where he is not trying to make his songs sound more 'Pop-like' just so it can be more competitive in the charts/billboard.
XO.
This album is awful compared to the trilogy kiss land had a few real good songs and the rest he killed, and the has the same a few good songs but nothing compared to the 2011 trilogy where every song was fire very disappointed to have waited 2 years was expecting bigger things!!! stop pleasing the people buying this album cause they heard it on 50 shades of grey and became your biggest fans!!!
I'm a new fan to the weekend great tunes from start to end peace out!! 👍🏼
Songs show no emotion like it used to. They're good songs, just doesn't sound like him singing. Have to face the fact that he's mainstream af
👌
Love it soo much!!!
❤️ it
Great album - nothing more to say!
obsessed tbh his voice is just 😍😍😍
© 2020 Chartoo. Available on iTunes. Product prices and availability are accurate as of 22/05/2019, 00:48:43 and are subject to change. Any price and availability information displayed on iTunes at the time of purchase will apply to the purchase of this product. Apple, the Apple logo, Apple Music, iPad, iPhone, iPod, iPod touch, iTunes, iTunes Store, iTunes U, Mac, and OS X are trademarks of Apple Inc., registered in the U.S. and other countries. Apple Books, App Store, and Mac App Store are service marks of Apple Inc. IOS is a trademark or registered trademark of Cisco in the U.S. and other countries and is used under license. QR Code is a registered trademark of Denso Wave Incorporated. All other trademarks, logos, and copyrights are property of their respective owners.
DesktopTabletMobile
Improve this translation
Preview provided courtesy of iTunes
Preview provided courtesy of iTunes