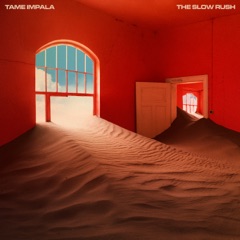 Tame Impala
7:13
£0.99
New
what a listening experience, feels fresh and like some of his best work yet, can’t stop listening to It Might Be Time & Posthumous Forgiveness
Five years is the time between 'The Slow Rush' and stunning 2015 ‘Currents' album; which after two albums before the aforementioned lead to making Kevin Parker a lyrical, sound and production powerhouse. His work influence a multitude of artists and his production skills were heavily lauded and coveted. On album four Parker still retains his Bee Gee-esque vocals as the addition to his plethora of hip-hop, electronic, psychedelic, funk, dance and soulful melodies. This is the his most popish album to date, at a running length of 57 minutes that spends more time wandering in and around through a labyrinth of synths and diffused soft-rock. It feels like one hour-long song or soundtrack that never really stops. Parker also has a unique way of making you lose yourself in a song so delicately and deeply that he then throws in a myriad of unique changes into those tracks as an anchor, makes you remember where you are, leading back on course after a short detour.
The name of the album is apt - a slow rush; just enjoy what happens, go with the flow and any other description that you find pertinent. There’s a meticulous nature of the obsessive with Parker and it shows here more than any other album - Parker works with a range of musicians but this is entirely his baby. His credits are printed firmly with the line “All music written, performed, and mixed by Kevin Parker.” He divides the album into almost environmental tones, with elements that sound very cityscape, some underground, and some sounding like beach summery fun. This is one of the most complex albums made, finely crafted cogs in a massive arrangement to form the entire cohesive sound. This body of work also allows Parker to stretch himself more, whether being held back creatively or the ambivalence of another album, he used that hesitation and twisted it and exposed it like a nerve. Choosing to exercising vexations; using his unease as he stated in an NME interview: “Even with this album, I was doing things that made me uncomfortable just for the purpose of being creative because I’m the most creative when I’m uncomfortable.”
The amount of focus is intrinsic to this album more than at any time before, too much and you get lost in it all, if that is your goal, too little and you wish for something more. It feels like a warm fireplace that radiates heat and light but also snaps and crackles and makes unusual noises that arrest your eyes and ears. In so far as being music for moods it’s right up there as one of the best, this is Pop and Psychedelic genre twisting sorcery to its finest.
Unbelievable. It's like John Lennon has met Daft Punk. And then something unique on top. Well worth the wait, it's the type of album where you can chill out, sing with and dance to. ❤️
Great to hear Tame Impala releasing another classy album. Loving all the released tracks so far.
Kevin Parker continually pushes the boundaries on modern music - well done to him and the rest of the group.
PS: Does anyone know if they are playing Glastonbury??
Honestly buzzing for this whole album. February couldn't come sooner though😂 tame impala and the songs he has produced or is producing have helped me get through some of the hardest days of my life. His music is a blessing to mine and many other people's ears🔥❤️
Best band going at the moment
It might be time - awesome
Wether it’s the clever 80’s nostalgic feel with a twist (logical song) by supertramps 1979 hit nod to the last single or listening to scritti politti’s influence to borderline, there’s no question of the talent and depth that’s gone in to the making of this record.
Buy this for the soundtrack of your life whatever the season is, this is a classic.
Have to say that every time I hear tame impala’s new songs I know that the the next album will be a whole lot more psychedelic, better and just completely awesome as a whole. ⭐️⭐️⭐️⭐️⭐️
Love borderline guys ! I’m pretty sure, I’m the reason for the 12 out of 13 million views on YouTube for that song. You’re the best. Much love and respect from the U.K ! Can’t wait to see you live again. This albums going to be awesome. Can’t wait.
Borderline and It Might Be Time are my favourites, there’s something so magical and nostalgic and about those two singles . I highly recommend listening to this album!
© 2020 Chartoo. Available on iTunes. Product prices and availability are accurate as of 24/02/2020, 02:24:14 and are subject to change. Any price and availability information displayed on iTunes at the time of purchase will apply to the purchase of this product. Apple, the Apple logo, Apple Music, iPad, iPhone, iPod, iPod touch, iTunes, iTunes Store, iTunes U, Mac, and OS X are trademarks of Apple Inc., registered in the U.S. and other countries. Apple Books, App Store, and Mac App Store are service marks of Apple Inc. IOS is a trademark or registered trademark of Cisco in the U.S. and other countries and is used under license. QR Code is a registered trademark of Denso Wave Incorporated. All other trademarks, logos, and copyrights are property of their respective owners.
DesktopTabletMobile
Improve this translation
Preview provided courtesy of iTunes
Preview provided courtesy of iTunes