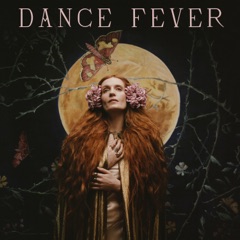 Florence + the Machine
Alternative
4:22
£0.99
0
Wow what can I say if these songs are anything to go by the album is going to be epic i for one cannot wait having just Dance fever the album well what can I say but it’s well and truly one dynamite album probably ranks as one of favourite albums of all time it’s amazing
Looking forward to listening over and over and digesting the words. Also the book in which this was based upon
Florence Welch and co. of Florence + the Machine are quintessentially a British international export. The modern Patti Smith British equivalent who can garner a massive crowd for the biggest music festivals to the most intimate of arenas like the Royal Albert Hall or Maida Vale. Since her debut ‘Lungs’ she has always been here, in essence there is pre-Florence and the Florence era. The band’s albums are always looked upon favourably and are haughtily coveted by fans and yearn for discovery from newer listeners. This latest venture sees the band and Florence hark back to the third blockbuster album ‘How Big, How Blue…’ while carrying on that folksier anthemic sound that boasted lower production values and raw sound via their fourth album ‘High As Hope’. Welch goes fully pagan here, after almost four years since the last album and a mixture of hopes and despair during a pandemic she opts to embrace the nymph character with a sense of realism in the lyrics that brings out more fallibility than fantasy.
“Restraint”, “Prayer Factory” and “Heaven is Here” sees her venture into more interluding territory with fast rhythmic beating lyrics and shorter song lengths to justify that it’s more about the lyrics and song-writing side of Welch that is on display. “Choreomania” still retains that gothicism, the wonderful occult-like witchcraft that could fill the soundtrack for a Tim Burton film; after all its Florence + the Machine you cannot have them without the weird. “Cassandra” goes more indie alternative than previous albums did, with the return of harps and choral sounds coming full circle and harking from ‘Lungs’. “Cassandra” also shows she’s still finding that fine finesse balance with retaining her signature sound without overlapping with her loving contemporaries – she’s not egotistical or boastful in that regard in that it feels like an effort to retain artistic truthfulness. The first single "King" has a ‘Ceremonials’ vibe; interlaced nostalgia that makes us wish to remember the 2011 era of dark, twisted and loud drumming peppered with howling vocals. ‘Dance Fever’ more than anything wants to become era-like, like the first three albums. ‘High As Hope’ felt more individual and less about giving off a charisma and felt more like a Florence solo venture, here the latest offering feels like the band at full strength and power. While "Morning Elvis" feels like the band at their most exposed yet, an open loose nerve. Where we would want the band, as before, going all out for the hell of it they offer up "Girls Against God" - a good example of that nature; which also is layered with a satirical slice of comedy which is almost unheard previously from the band’s repertoire. "My Love", is the album’s catchy anthemic banger that has all the hallmarks of a Florence song. A song that would most likely hit the eardrums of singletons struggling to find the one and when you feel you have so much love to give but not enough of someone to accept it all. A reflection on the loss of creativity and how she regained her inspiration. This album is very lyrically focussed, the song-writing nature is on full blast with close approximation to ‘Ceremonials’ and ‘How Big, How Blue…’ if that is what some fans are looking for, but there is much more to gorge on here than a feeling of repetition, essentially, it’s the dance-themed album they wanted to make. That grand, bombastic summer hit really to deluge the airwaves and fill in every festival. It’s the album for renewal, during a sunsetting hot summery night floating with friends and family in a field full of lights and glimmer and loud drumming.
Everything so far is just incredible
Free is the best single so far
Good grief, every song released so far is a triumph. Only Florence could pull that off
The songwriting is poetry and it’s only 3 tracks so far .I am very much looking forward to the full release because upon listening to these songs I realise how much I have missed f & tm 🥰
🔥👩🏻‍🦰👑🔥👩🏻‍🦰👑🔥
this is true art
🔥🔥

© 2022 Chartoo. Available on iTunes. Product prices and availability are accurate as of 21/05/2022, 08:45:49 and are subject to change. Any price and availability information displayed on iTunes at the time of purchase will apply to the purchase of this product. Apple, the Apple logo, Apple Music, iPad, iPhone, iPod, iPod touch, iTunes, iTunes Store, iTunes U, Mac, and OS X are trademarks of Apple Inc., registered in the U.S. and other countries. Apple Books, App Store, and Mac App Store are service marks of Apple Inc. IOS is a trademark or registered trademark of Cisco in the U.S. and other countries and is used under license. QR Code is a registered trademark of Denso Wave Incorporated. All other trademarks, logos, and copyrights are property of their respective owners.
DesktopTabletMobile
Improve this translation
Preview provided courtesy of iTunes
Preview provided courtesy of iTunes