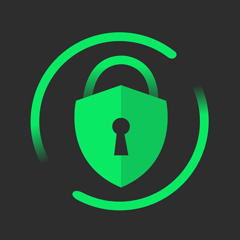 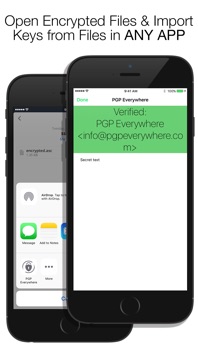 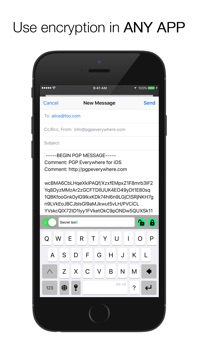 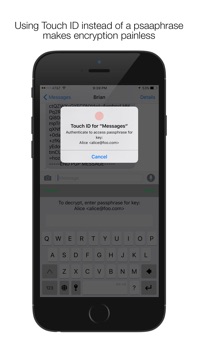 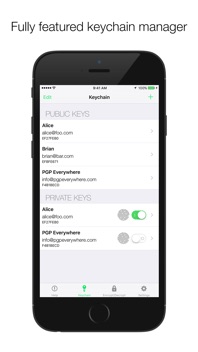 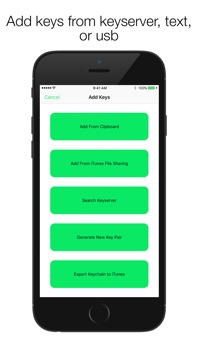 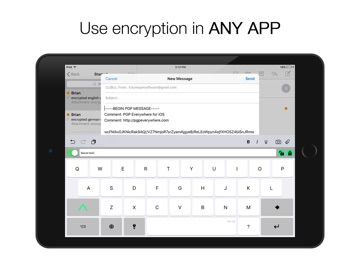 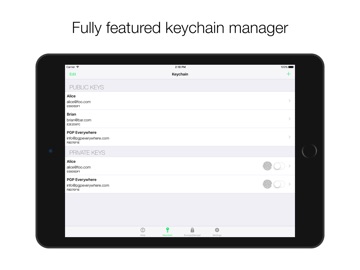 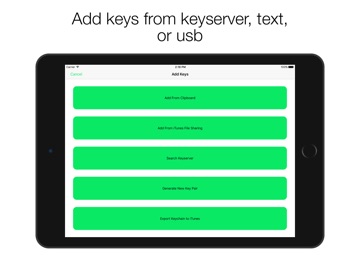 FEATURES:
+ Generate RSA Key Pairs
+ Encrypt/decrypt/sign/verify anywhere with keyboard extension
+ Open encrypted text files with Action Extension
+ Import keys directly from files with Action Extension
+ Interact with key servers
+ Sign public keys
+ Touch Id
+ Multiple languages & keyboard layouts
+ Import/Export keys securely via USB with iTunes File Sharing
PGP Everywhere is an iPhone / iPad app that allows you to utilize the security of PGP encryption anywhere you type, in almost any app!
PGP Everywhere is a PGP keychain manager with two app extensions:
1. Our keyboard extension allows you to encrypt, decrypt, sign, and verify messages anywhere that you input text.
2. Our action extension allows you to open .asc files and either import the contained keys or decrypt the contained message from whatever app the file is in.
PGP Everywhere replaces stand-alone PGP Mail apps that have limited features and stand-alone encrypted messaging apps that have limited user bases and instead allows you to use PGP encryption with all the apps you already love.
*** KEYBOARD EXTENSION ***
Encrypt within any app
*** TOUCH ID for PASSPHRASE***
PGP Everywhere emphasizes ease of use and convenience. The option to use Touch ID instead of entering your passphrase allows you to encrypt and decrypt in places where it would be too inconvenient and cumbersome otherwise, like texting or instant messaging.
*** GENERATE KEYS ***
PGP Everywhere offers the ability to generate new key pairs
*** SECURELY IMPORT KEYS ***
In addition to importing keys vie copy/paste, PGP Everywhere allows you to securely import your existing private key via iTunes File Sharing
*** MULTIPLE LANGUAGES ***
App Supports:
-English
-German
-Russian
Keyboard Supports:
-English
-German
-Russian
-Spanish
-French
-Italian
-Dutch
-Portuguese
This app utilizes open source implementations of openPGP.

4 Ratings
The required keyboard extension cannot be enabled because it does not show up in the list. So without that the app is of no use at all. iPad Pro 12" iOS 11.4.1 2018-08
But it only works with single line messages, using the keyboard in other apps like Airmail causes it to only encrypt a single line, multi-line messages are not supported.
It would be fine if the sharing function allowed me to encrypt as well as decrypt, but it only decrypts - missing a trick there I think.
Im using it about 8months and its really good. But the main probem is i couldnot decrypt any file from my mesaage . I can only decrypt the message not the file. Can u update it and make it easy for decrypt any file .
Thanks
Paid a ridiculous £2.99 for this app only for it to close every time you click anything.
You cannot leave the help page.Waste of money. Avoid.
The app instantly crashes as soon as you tap on any button. Not great.
Since this app is closed source and since Apple provides no means to see/verify outgoing connections from apps, this app could easily be a honeypot for collecting people’s private keys.
If the developers want to prove it's not, they can release the source under GPLv3+, which would still enable them as copyright owner to sell the app on the App Store under Apple's license while allowing for third-party inspection of the source. Of course, even that won't guarantee that the binaries submitted to Apple come from the released source (or that a backdoor wasn't injected by Apple following submission which, while technically possible, isn't something I believe Apple would do as it would irreparably harm their reputation) but it would go a long way towards building trust for the app.
The easiest solution would be for Apple to provide either/both (a) granular support for allowing/disallowing outgoing connections (b) transparency on outgoing connections.
As such, I've purchased the app but, sadly, I won't be using it.
Decrypting messages just results in an error. Skip this app and use iPGMail instead
Useless.doesn't work for iOS 10
If you have upgraded your device, do not bother purchasing this. It does not work anymore. Will not encrypt or decrypt anything. just errors out. tried wiping and reinstalling - deleting and reimporting keys nothing. Have emailed the dev and got a nice response, but they have not fixed the problem
Checking signed emails in other pgp based products (enigmail, gnupg, mailvelope) all reported that emails signed by this product where not valid. So not usable for me.
Sorry but "allowing full access" is NONSENSE - deleted!

© 2022 Chartoo. Available on iTunes. Product prices and availability are accurate as of 22/05/2022, 08:25:41 and are subject to change. Any price and availability information displayed on iTunes at the time of purchase will apply to the purchase of this product. Apple, the Apple logo, Apple Music, iPad, iPhone, iPod, iPod touch, iTunes, iTunes Store, iTunes U, Mac, and OS X are trademarks of Apple Inc., registered in the U.S. and other countries. Apple Books, App Store, and Mac App Store are service marks of Apple Inc. IOS is a trademark or registered trademark of Cisco in the U.S. and other countries and is used under license. QR Code is a registered trademark of Denso Wave Incorporated. All other trademarks, logos, and copyrights are property of their respective owners.
DesktopTabletMobile
Improve this translation
Preview provided courtesy of iTunes
Preview provided courtesy of iTunes