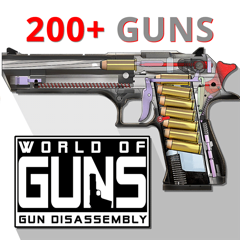 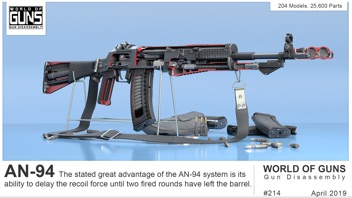 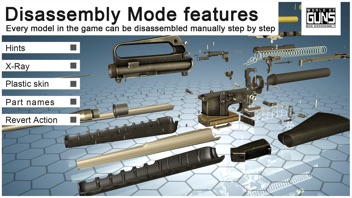 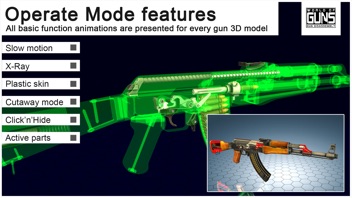 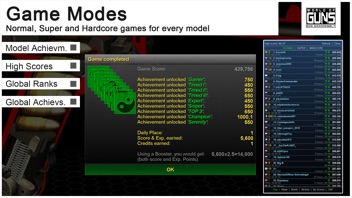 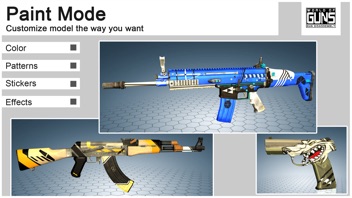 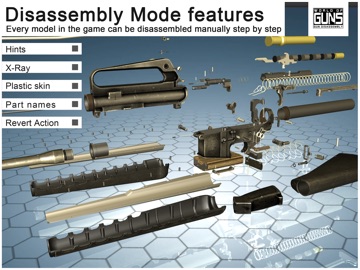 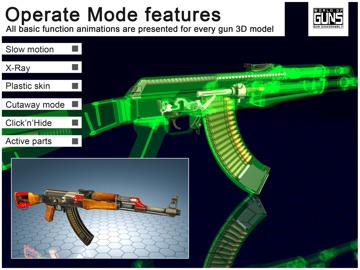 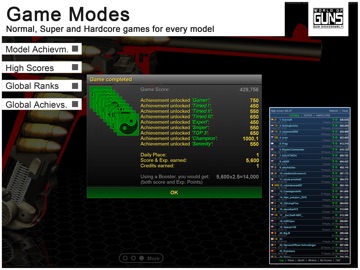 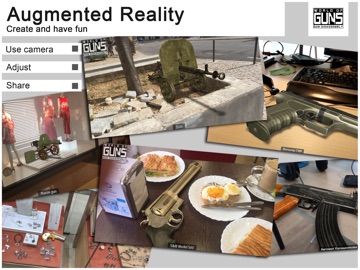 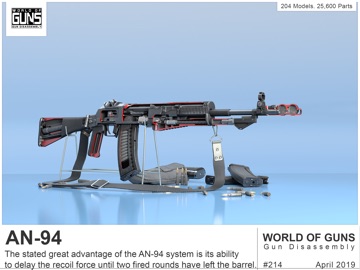 Do you know how the insides of a Terminator’s Minigun work? Try World of Guns: the world’s most realistic 3D simulator of firearms (and other things from tanks to DeLorean time machines). Find out what makes legendary pistols, rifles, machine guns and artillery pieces tick… Then disassemble them down to the tiniest part!
WHAT IS WORLD OF GUNS?
A free-to-play game and an interactive encyclopedia, simulating real firearms in 3D. Here, you can literally climb inside a gun and understand its workings; cut it in half, fire it and bring time to a crawl; and finally, completely disassemble it and put it back again (against the clock if you wish).
WoG meticulously recreates historical and modern examples of firearm designer genius — from a tiny Liberator pistol to a 16000-pound FlaK 88 anti-aircraft gun. It has both legendary World War guns and rare models that even museums struggle to find. World of Guns puts 200 years of firearm history into a single, sleek and engaging video game.
187 GUN MODELS, 203 TOTAL MODELS AND 25 500 PARTS
Here you are guaranteed to find something that catches your fancy:
• sleek & modern Glocks, P90s, M4s and Tavors
• guns steeped in history like Colt SAAs, Garands and Lee-Enfields
• a vast arsenal of Soviet-bloc guns, from various AKs to the rarest VSS Vintorez
• a dainty pocket derringer or a fire-breathing M134 Minigun
• a .22 sporting Ruger or a mighty .55-caliber Boys Anti-Tank rifle
Not only WoG covers most important models in firearm history, but also the most popular screen divas like Desert Eagle and SPAS-12.
TONS OF GAME MODES AND FEATURES
Every model includes:
• modes for learning operation, handling, and field stripping the gun;
• the armorer mode where you can completely disassemble the firearm;
• timed game modes, including a hardcore mode and a high scores table.
See every detail with the fully controllable camera, layered X-Ray feature and a Cutaway mode, along with complete time control including a slow-motion feature down to 50x. You’ll even see the gasses flow inside a gas block!
The game also features:
• 10 shooting ranges with timed objectives (from Glocks to RPG-7s)
• paint mode that lets you create custom weapon skins
• mini-games and quizzes with XP prizes
UNPARALLELED REALISM
World of Guns has been used as a learning aid by armorers, law enforcement and military personnel. To create each model, our team spends months poring over actual guns, photos, blueprints and documents. Each part out of hundreds functions in a physically correct way – exactly as it does in a real thing. There are few ways to understand the different firearm actions and systems as clearly.
CONSTANT UPDATES
Noble Empire releases several new models every month, and improves the older ones. Majority of our models can be unlocked for free by anyone; power players will be able to achieve 100% completion and unlock ALL the gun models without spending a dime.
SUBSCRIPTION
The game offers two subscription plans for half year and one year
The price for one year subscription 39.99 USD (price may be varied depends on currency of the country)
The price for half year subscription 24.99 USD (price may be varied depends on currency of the country)
Subscription automatically renews unless auto-renew is turned off at least 24-hours before the end of the current period
Both subscription plans give access to the following game content:
- all presented 3D interactive gun models (except bonus section)
- all 3D interactive gun models which are added during subscription term (minimum 1 model per month)
- all available shooting ranges (except items in bonus section)
Important information:
Terms of Service http://noble-empire.com/apps.php?app=wog&page=terms
Privacy Policy http://noble-empire.com/privacy.php

69 Ratings
When trying to do the game with the AR 70/223, I can’t activate parts of the gun that I know are able to be activated. I have to use a hint to be able to remove the part. Please this fix this and the game would be 5 stars again!
Simply the best game for any gun enthusiast out there! I love every minute of using it. It allows to track some of the design trends in different families of guns. the are detail enough to use them as a disassembly guides in real world. this is amazing! the library os constantly growing and trying to put together hundreds of parts is a great challenge :) I cannot over recommend this app. thank you to the developer!
Everything about this game is 5 star, gun nuts or puzzle nuts will love trying to get faster....get it or regret it.
I play this game when I’m bored or if I have no internet. Even though this game may be old, it’s a really fun game to play!
world of guns has every single gun from the nineteenth century and onward. I really recommend this game for historians and people huw now there guns. I would like to see muskets and flintlock pistols in the future and I really recommend the type 99 and the kar89k and lee enfeld for gun enthusiasts
Great detail
I enjoy this game a lot, I’m a fun fanatic, despite being British. I do however dislike the reload speeds, I believe you should make them slower as the weapons reloads far too quick to be fun or immersive. Please reduce the speed of reloads, thank you
When I wanted to to go onto playing it I could not because I could not choose the guest mode so hope you can fix it soon
I have played this game for about 2 years now without spending a penny and I have somewhere around 20+ firearms in my collection ranging from WW1 era to modern era firearms. Every single weapon is modeled amazingly with an in depth history of the firearm in question and they even included specific details from the ammo used and who manufactured said weapon. Everything is fairly priced and with constant updates and additions it’s hard to imagine anyone not enjoying this. You even have music selection for free if the default music isn’t to your taste. I only wish they would perhaps update the graphics slightly but this is such a non issue I’m just nitpicking at that point. Thank you to the developers for all your hard work it is truly above and beyond here for a free to play game.
Great game but Mkl mk 1l doesn’t work when I try to take it apart it just takes me out of the game please try to fix it
0 stars if possible
Can’t even get in the game before it messes up
One of my most favourite app !! Love it
Love guns or hate ‘em (I’m more the latter) this is a great little game and very addictive. I’d like to see more of the vehicles personally, but the guns are all very detailed and fun to pull apart and put back together again. Recommended
By far one of the most realistic gun disassembly and reassembly simulators I've seen!

© 2022 Chartoo. Available on iTunes. Product prices and availability are accurate as of 31/01/2022, 08:16:35 and are subject to change. Any price and availability information displayed on iTunes at the time of purchase will apply to the purchase of this product. Apple, the Apple logo, Apple Music, iPad, iPhone, iPod, iPod touch, iTunes, iTunes Store, iTunes U, Mac, and OS X are trademarks of Apple Inc., registered in the U.S. and other countries. Apple Books, App Store, and Mac App Store are service marks of Apple Inc. IOS is a trademark or registered trademark of Cisco in the U.S. and other countries and is used under license. QR Code is a registered trademark of Denso Wave Incorporated. All other trademarks, logos, and copyrights are property of their respective owners.
DesktopTabletMobile
Improve this translation
Preview provided courtesy of iTunes
Preview provided courtesy of iTunes