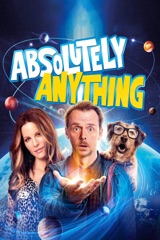 Absolutely Anything will follow a disillusioned school teacher, Neil Clarke (Pegg) who suddenly finds he has the ability to do anything he wishes, a challenge bestowed upon him by a group of power-crazed aliens (voiced by Cleese, Gilliam, Jones, Palin & Idle), watching him from space. As he struggles to deal with these new found powers and the events that subsequently arise, he calls upon his loyal canine companion Dennis (voiced by Robin Williams) to help him along the way. Mishap after mishap finally leads him to the ultimate conundrum that all men dread and at which many have failed….should he choose the girl….or the dog….?
this was a fun film ,, why knock it ,, it was meant to be a no brainer ,, just fun ,, and i loved it
I haven't seen a worse film for years. I'm a big Pegg fan so don't know what went wrong but this was terrible. He does his best but the script is terrible. Give this film a wide berth.
I've never been a fan of Simon Pegg and nothing changed after watching this crap. An amazingly weak story, awful acting by an awful cast basically sums up this poor excuse for entertainment. This is definitely the last Simon Pegg film I'll ever watch. He's just not funny.
This should be rated a 15 not a 12.
Easy going typical Simon pegg film - a few laugh out loud gags - easy watching, few adult moments so don't watch with kids less than about 12 years old. Worth a watch.
Total waste of time, instantly forgettable characters/actors and a non-existent storyline....do not waste your money! One star is because I couldn't submit review with zero stars!
This comedy is utterly hilarious and extremely fun yet is incredibly underrated and unfortunately attracts a load of undeserved hate!
The acting, script and humour is all on top form!
A must watch for those looking for a great comedy to put them in a great mood!
Painfully awful film. A script written by and for a 12 year old….this film is not aimed at adults!
Watch if: you want a weird, British humour comedy, casual viewing, not a 'think very hard' movie featuring remaining m.p. Members, Williams and Pegg, but no duh, that's advertised. Bare in mind humour is selective.
Don't watch if: you don't like (or want to watch) the above I guess?
Review: Not Simon Pegg's finest work, however I would not put it down to poor acting or a bad script. Evidently the film, which has a very short runtime is clearly because Robin Williams, who plays as the dog, passed away during filming and therefore you can notice some scenes have not been done due to an absent Williams. The humour is reminiscent of monty Python, with all surviving members in it. However this alone does not hold the movie on its own as they are not the main focus and are used sparingly. I would of liked to see more of izzard!
All this being said, I felt that parts were highly enjoyable and went in knowing the problems production had (Williams, pegg and monty Python.... Who wouldn't be wondering what was up with that?) and therefore shouldn't be slandered so heavily!
Cheers
Funny, entertains story to make a good movie
Seriously, do not waste your money on this. It could have been so much better!
Don't waste your money ! 5£ is better a Big MAC
Great cast light hearted funny film. Definitely worth a watch. Good storyline.
Poorly written, seems like no effort went into the story, and is basically a British version of Bruce Almighty (although Bruce Almighty is alright)
Imagine the King Midas of excrement - Pegg’s skid marks are all over this like a muck-spreader on nitrous :-(
AVOID
like something from the 80’s, this is really awful british comedy. Weak gags, pretty bad acting, tired scenes. Save your money
Wanted so much to enjoy this, the cast and plot were very promising but sad to say didn’t deliver. Would have made a good short story. Shame.
Watched this with my daughter an we had a good laugh. Its not the greatest pegg movie and the language a bit bad for a 12, more like a 15 i would say, i suspect the rating is incorrect.
Brilliant
What a thoroughly terrible script and very poor jokes. This film has no redeeming factors.
i can only assume the fee was too good to refuse. His weakest film to date. Funny moments here and there. Some smart effects, but seems he was dialing this one in. Simple, basic, fun if drunk.
Painful to watch. Definitely the worst film Pegg's been in. Don't waste your money
My Wife and I really enjoyed the movie and for the most part it was very funny. It kind of reminded me of Hitchhikers Guide to the Galaxy and we enjoyed the comedy style.
the acting was actually good and the characters likable, it was a fun movie to watch but one thing let it down.
What let the film down is the swear words, the movie didnt have loads but maybe over half a dozen and they just didnt need to be there. They didnt even fit in or feel right being used where they were placed.
I wish they would have taken the swear words out and re released it and it would be great for everyone to enjoy!
I bought this to watch with my daughter, 12. The idea is okay, although the jokes are pretty irreverent most of the time. After 20 minute I had to turn it off because of all the references to ‘fu**ing” and ‘sha**ng’
Inane trash!
went to see this at the cinema a great movie with lots of laughs couldn’t stop laughing at the dog scenes if you ever wandered what a dog is thinking watch this very funny would easy watch again at home on iTunes this will be added to my comedy favourites a must buy :)

© 2022 Chartoo. Available on iTunes. Product prices and availability are accurate as of 26/10/2021, 08:44:22 and are subject to change. Any price and availability information displayed on iTunes at the time of purchase will apply to the purchase of this product. Apple, the Apple logo, Apple Music, iPad, iPhone, iPod, iPod touch, iTunes, iTunes Store, iTunes U, Mac, and OS X are trademarks of Apple Inc., registered in the U.S. and other countries. Apple Books, App Store, and Mac App Store are service marks of Apple Inc. IOS is a trademark or registered trademark of Cisco in the U.S. and other countries and is used under license. QR Code is a registered trademark of Denso Wave Incorporated. All other trademarks, logos, and copyrights are property of their respective owners.
DesktopTabletMobile
Improve this translation
Preview provided courtesy of iTunes
Preview provided courtesy of iTunes