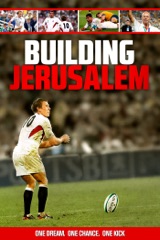 22nd November 2003: The Rugby World Cup Final.
After six weeks of gruelling competition, England is battling reigning champions Australia. The two teams are inseparable after eighty minutes: the game drags deep into extra time with just two minutes left on the clock.
England rumble to within 40 yards of the post. The ball is sent spiralling back to Jonny Wilkinson, the golden boy of English rugby, in a split second he drop kicks for goal and a chance for sporting immortality….
From Director James Erskine (The Battle of the Sexes, Pantani: The Accidental Death of a Cyclist) and producer Victoria Gregory (Senna, Man on Wire) Building Jerusalem combines scintillating match action, extraordinary original interviews with the key players including Jonny Wilkinson, Sir Clive Woodward, Martin Johnson and Matt Dawson, with never-before-seen behind the scenes and match footage.
It is an astonishing story of pressure, expectation and courage, tracing the roots of success back to the professionalization of the game in the 90s, culminating in that
glorious World Cup campaign of 2003 that turned Woodward’s poisoned chalice into a golden cup.
Everyone remembers where they were when THAT drop kick was made. I was shouting at my screen again when Jason Leonard ran his try home.
A good insight into the culmination of genius planning by Woodward supported by a very hungry team. This is definitely worth a watch - I feel a bit of a fraud only paying 99p for the rental now!
It made me feel almost like we had only just one the cup - 13 years later.
If you've watched any sort of documentary or program about this World Cup, or even watched a few YouTube videos, then you've seen all this before. There's a few minutes of interesting interviews about the game turning pro, but other than that it's pretty much the same interviews that have been filmed before but they're sat in different seats.
The match footage is minimal, really. Really short pieces of footage and then a lot of stills. Nothing special here either.
Of course I love it because I'm and England fan, but it's not what I thought it would be.
I really enjoyed this documentary. It gives great insight on the build-up to and eventual World Cup win in 2003 with commentary from 3 key England heros. But it lacks dimension. As we all know, there were a 15 players on the pitch for each game and many more heros than given airtime in this documentary. While Jonny and Johno played big parts, others also had a great deal to add and their views are not shared here. I am sure not everyone saw eye to eye but still contributed. I would have liked to have heard more from other England players, Australians, French etc to make this truely 5 stars.
This will be my number 1 christmas present for everyone I know! SO EXCITED!!
Hair raising excitement, let's hope England can pull off a repeat performance this world cup!
If you watch just one sports film this year make it this one! Lets hope for more memories to be made this time round, COME ON ENGLAND!
Looks to be a great film
Remember watching the final as if it was yesterday!
© 2022 Chartoo. Available on iTunes. Product prices and availability are accurate as of 14/01/2022, 08:43:04 and are subject to change. Any price and availability information displayed on iTunes at the time of purchase will apply to the purchase of this product. Apple, the Apple logo, Apple Music, iPad, iPhone, iPod, iPod touch, iTunes, iTunes Store, iTunes U, Mac, and OS X are trademarks of Apple Inc., registered in the U.S. and other countries. Apple Books, App Store, and Mac App Store are service marks of Apple Inc. IOS is a trademark or registered trademark of Cisco in the U.S. and other countries and is used under license. QR Code is a registered trademark of Denso Wave Incorporated. All other trademarks, logos, and copyrights are property of their respective owners.
DesktopTabletMobile
Improve this translation
Preview provided courtesy of iTunes
Preview provided courtesy of iTunes