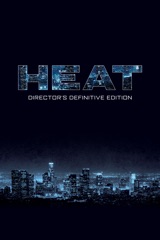 Academy Award-winners Robert DeNiro ('Showtime,' 'Analyze This') and Al Pacino ('Insomnia,' 'Any Given Sunday') -- together for the first time since 'The Godfather Part II' -- head a stellar cast in this taut psychological drama about an obsessive detective and a brilliant thief whose fates are linked in the aftermath of a high-stakes securities heist.
One of if not my favourite movie. So well made and this was possibly one of the last truly great films that De Niro and Pacino did. I’ve watched it countless times and just enjoy it more every time.
Pacino and deniro enough said ✅✅✅✅✅✅😃😃😃😃😃😃
I purchased this in 1080p some time ago - why isn’t there a free upgrade to 4k?
Love this film. 4k hdr is reason enough to buy again.
What can i say about Heat that you "those of you who seen it already know" a master class in casting, acting, plot and character's you will care about. But who's side will you take? Who will you root for? In a film that's breathtaking and all done in the style of Michael Mann see it, feel it.
Cracking film, meeting of two greats, one of my best films ever. Could watch it over and over.
A Great Film 👍🏻🙂👍🏻🙂👍🏻
iTunes NEVER FAILS to create THE WORSE trailers imaginable. The trailer for this film has NOTHING to do with just how awesome this film is.
I bought the original on iTunes, then iTunes removed it! This is the 'director's definitive edition' and I don't have access to it. So I need to purhcase it again! Can you belive it!
I can say hand on my heart that this is truly the greatest film I have ever had the pleasure of watching. My favourite of all time and I'm positive that nothing can change that. Apart from quite a long and fairly complicated backstory, this film contains some brilliant scenes of action and dialogue, portraying themes of both violence and friendship, even between main characters Al Pachino and Robert De Niro who are enemies in the movie. Although quite a long film, almost reaching the 3 hour mark, it's one that will keep you on the edge of your seat the whole way through, especially with a colossal armed robbery of a armoured truck at the start, and a famously monumental shootout scene between the bank robbers and the cops halfway through. This is certainly worth a watch, and once you have, it's a film you'll want to keep stashed away safe for a rainy day.
One of my all time greats, al Pacino,Robert deniro what more can you ask for.
I rarely give films five stars, but this is well deserved. Two of the greatest Hollywood stars meet (and clash) in this epic police drama. Al Pacino plays an LAPD lieutenant in charge of a robbery squad working to catch a team of professional criminals lead by Robert De Niro, who robbed an armoured security van. There's a fair bit of back story to the main characters; Pacino on his third marriage, which itself is failing, De Niro with a burgeoning relationship with a woman he met in a cafe, and Val Kilmer (part of De Niro's gang) with a problematic relationship with his wife, played by Ashley Judd. The acting by all is superb, and strong support by the likes of Tom Sizemore (bad guy), and Wes Studi (good guy). It is action and adventure from the armed robbery until the end, with one of the most incredible shoot-out scenes ever. How the producers closed down central Los Angeles for it is amazing. Top-notch. But the film has one understated and brilliant scene; where Pacino, frustrated with the way the investigation is going, decides to confront De Niro, and proceeds to have coffee with him in a diner. But it's such a powerful and iconic moment; Tom Hiddleston (not in the film, btw), a great mimic of other actors, even copied the scene last year on the Graham Norton Show, that's how brilliant he thinks the two stars are. The film ends in a most climactic way. You know it's coming, and it doesn't disappoint. Brilliant film.
© 2022 Chartoo. Available on iTunes. Product prices and availability are accurate as of 22/10/2021, 08:48:26 and are subject to change. Any price and availability information displayed on iTunes at the time of purchase will apply to the purchase of this product. Apple, the Apple logo, Apple Music, iPad, iPhone, iPod, iPod touch, iTunes, iTunes Store, iTunes U, Mac, and OS X are trademarks of Apple Inc., registered in the U.S. and other countries. Apple Books, App Store, and Mac App Store are service marks of Apple Inc. IOS is a trademark or registered trademark of Cisco in the U.S. and other countries and is used under license. QR Code is a registered trademark of Denso Wave Incorporated. All other trademarks, logos, and copyrights are property of their respective owners.
DesktopTabletMobile
Improve this translation
Preview provided courtesy of iTunes
Preview provided courtesy of iTunes