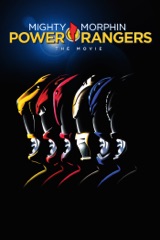 The popular children's television show comes to the screen in this sci-fi adventure about a group of teenage superheroes battling an evil leader bent on world domination. The film's six heroes lead double existences as normal young teens who, when needed, don color-coded costumes to become the Power Rangers. Under the guidance of the valiant Zordon (Nicholas Bell), the Rangers fight crime with kung-fu skills and specialized attack vehicles. This time, the Rangers are battling Ivan Ooze (Paul Freeman), a millennia-old villain who hopes to take over the world with an army of phlegm creatures. The Rangers' only hope for victory is to acquire a special power source, leading to a dangerous journey into outer space. Despite the larger budget, the film remains true to the style of the show, which often recalls Japanese monster movies in its depictions of battling giant monsters through obvious special effects. The fast-paced fantasy action attracted a good portion of its intended youthful audience, while not becoming quite as much of a sensation as the TV series; some adults attacked the film for its reliance on violence (though of a bloodless, cartoon variety) and its status as a blatant promotional tool for the best-selling Power Ranger toys.
I want to buy this not rent it. Come on Apple sort this out please.
Put it to buy not rent !!!!!! Come on iTunes it’s a classic I want to buy this please
I remember being a kid going to watch it for the first time in the cinema, and still love this as an adult, but why cant i buy this and why is it only for rent ? Come on iTunes please sort this out !
Why is this film only for rent I would like to buy it ?
Why can’t I buy this yet, it’s been only available to rent on here for years now , get it sorted iTunes ffs !
But why can’t we buy it?? Clearly after years Apple isn’t reading these reviews! 😒
Buy it now button please!!!
Why can’t you buy this
iTunes.. why rent it, when you can buy it!! I have the money waiting! 🤑🤑 Let the fans have this as a download... please?
Who would pay 3.49 just to watch a film once on an iPad.thats just dumb.this film is way better than that new trash that dared to use the name power rangers,yet you sell that awful attempt at a so called movie but this classic remains impossible to purchase.
SORT IT OUT!!!!
I remember watching this when I was a kid I wanna buy it not rent it also why is it only aged 18?
Always loved this movie but please let us fan buy it instead of just renting it and it’s not rated 18 it’s PG.
AMAZING but we NEED to be able to BUY IT not just rent it
Please can you allow us to buy this in High Definition as I would love to own this.
Personally I think this is better than the new film :) it's 90's gold
iTunes listen to your reviews. We want to buy not rent!
I wana buy it not rent it!! Come on iTunes sort it out 😩
Why can i only rent this?????
I love this movie it brings back the 90's for me wot a time. Is it chessy yes but a good kinda chess and I still love this movie I will always love this movie. Does the CG hold up for me the CG does and I know this isn't for everyone but I love it so god dame much

© 2022 Chartoo. Available on iTunes. Product prices and availability are accurate as of 11/01/2022, 08:51:54 and are subject to change. Any price and availability information displayed on iTunes at the time of purchase will apply to the purchase of this product. Apple, the Apple logo, Apple Music, iPad, iPhone, iPod, iPod touch, iTunes, iTunes Store, iTunes U, Mac, and OS X are trademarks of Apple Inc., registered in the U.S. and other countries. Apple Books, App Store, and Mac App Store are service marks of Apple Inc. IOS is a trademark or registered trademark of Cisco in the U.S. and other countries and is used under license. QR Code is a registered trademark of Denso Wave Incorporated. All other trademarks, logos, and copyrights are property of their respective owners.
DesktopTabletMobile
Improve this translation
Preview provided courtesy of iTunes
Preview provided courtesy of iTunes