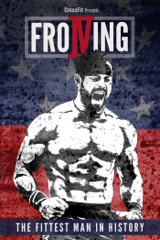 Rich Froning Jr. entered the 2014 CrossFit Games competition with three consecutive victories, a feat that no other athlete had accomplished. After finding CrossFit in 2009, Froning began a history-making career, finishing second at the CrossFit Games in 2010 and dominating the competition for the next four years. His four titles, five trips to the podium, 16 event wins, 35 top-five event finishes and 45 top-10 event finishes are all records, and he’s revered in the community. Froning’s athletic prowess has been under the microscope for five years, but there’s much more to the man from Tennessee than snatches and pull-ups. In this in-depth documentary by Heber Cannon, take a look into the life and childhood of the fittest man in history, follow his quest to a fourth straight CrossFit Games championship, and see him as a son, a husband and a new father.
A must see for all who love to train and want to be inspired by the world of fitness!
Awesome to see more behind the scenes clips, and more detail in the story of Rich Froning. Quite moving seeing genuine emotion from him after discussing intimate details of his life. Well worth a watch
Such a great film. The man is a legend. I think you'd enjoy the film even if you're not a Crossfit "fan", because there's so much more to it, than just Crossfit.
From beginning to end I was smiling! I laughed, cried and felt like I got to know rich's family & friends at a whole new level. This this a great documentary about an even greater person who is driven for all of the right reasons! Good job Heber!
You RX'd this 1!!
Gutted I paid for a you tube video
Finished the gym this morning and clicked into iTunes to settle down to a nice relaxing film. Found this, and it’s motivated me to go to the gym again this evening. Rich Froning is an absolute beast!
Froning isn't a bad film. Just not worth buying. A lot of the film is covered in the book and on the games website. It briefly goes into his training but does NOT reveal anything that people don't already know. The way to success is through HARD WORK AND DEDICATION. wish I just rented the film now.
© 2022 Chartoo. Available on iTunes. Product prices and availability are accurate as of 15/01/2022, 08:39:52 and are subject to change. Any price and availability information displayed on iTunes at the time of purchase will apply to the purchase of this product. Apple, the Apple logo, Apple Music, iPad, iPhone, iPod, iPod touch, iTunes, iTunes Store, iTunes U, Mac, and OS X are trademarks of Apple Inc., registered in the U.S. and other countries. Apple Books, App Store, and Mac App Store are service marks of Apple Inc. IOS is a trademark or registered trademark of Cisco in the U.S. and other countries and is used under license. QR Code is a registered trademark of Denso Wave Incorporated. All other trademarks, logos, and copyrights are property of their respective owners.
DesktopTabletMobile
Improve this translation
Preview provided courtesy of iTunes
Preview provided courtesy of iTunes