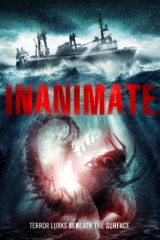 A group of grad students have booked upon the fishing trawler Harbinger, to study the effects of global warming on a pod of Orcas in the Bering Sea. When the ship's crew dredges up a recently thawed piece of old Soviet space wreckage, things get downright deadly. It seems that the Russians experimented with tiny resilient animals able to withstand the extremes of space radiation. The creatures survived, but not without mutation. Now the crew is exposed to aggressively mutating organisms. And after being locked in ice for three decades, the creatures aren't about to give up the warmth of human companionship.
I thought this film was ok actually, yeah it’s similar to ‘the thing’ and ‘alien’ but if you like that sort of thing you will like this.
Okay .. I've got a soft spot for Studio ADI, as these guys have done amazing work over the years on many big and low budget features. "Inanimate" .. or as it's known in the US and Canada "Harbinger Down" is a film made by Studio ADI in order to show that Practical visual FX is still very much a cool thing, and that CGI can be a great tool to aid visual FX and story telling .. but that the core of a good horror film should be a 'real' monster.
I'll admit that the film feels like it falls short of actually proving this concept because the film constantly hides the monster from us. That's not always a bad thing .. sometimes less is more .. but it seems like they hid the practical monster because it had short comings?! Shots are often quick and dark and in some cases things just whip past the camera before you even know what that hell it was.
John Carpenter's 'The thing' remains an absolute masterpiece (for some many reasons I'd be here all day extolling the virtues of that film) and mainly because the fims monster was incredibly realistic and in your face for an uncomfortable amount of time .. you'll NEVER forget those visions of hellish monsters .. but with Harbinger Down (I live in Canada so I'm addressing this film in it's proper title), it's hard to remember what the creature looked like because .. you never get a good look at it.
Other short comings are the predicatable and bland storyline and care board cut-out character types.
However .. I'm now gonna sing this films praises .. the actors all did a brilliant job. Lance Henrickson especially shines in this movie. The film crew all did a great job with set building, and even the monster design (little of it though we see) was clearly done nicely. Music score is done well .. but is missing a memorable theme .. going for the action crash-bang music type instead of something more moody and hum-worthy.
It's important to remember that this film was funded by crowd funding and with a budget of only $300,000 these guys made a thoroughly enjoyable B movie creature feature. It's easy to trash this film by holding it up to the standrd of Alien, or 'The Thing' .. but the fact is this was made for a much lower budget and by a first time director.
I give this a 4 star because it's a great effort byt this studio, and an enjoyable movie. If you're a fan of creautre features then you're not complete without adding this one to your collection. It's not great art .. but it's art! And I hope studio ADI does a lot more of these in the future.
...but without the story, acting, direction, scenery, special effects, editing, budget, production, lighting, camera work, make-up, grip ('grip'?), snooker table and dogs.
this film is like ALIEN on a real ship. Thrilling action and cool creature, loved it
© 2022 Chartoo. Available on iTunes. Product prices and availability are accurate as of 06/05/2021, 09:28:16 and are subject to change. Any price and availability information displayed on iTunes at the time of purchase will apply to the purchase of this product. Apple, the Apple logo, Apple Music, iPad, iPhone, iPod, iPod touch, iTunes, iTunes Store, iTunes U, Mac, and OS X are trademarks of Apple Inc., registered in the U.S. and other countries. Apple Books, App Store, and Mac App Store are service marks of Apple Inc. IOS is a trademark or registered trademark of Cisco in the U.S. and other countries and is used under license. QR Code is a registered trademark of Denso Wave Incorporated. All other trademarks, logos, and copyrights are property of their respective owners.
DesktopTabletMobile
Improve this translation
Preview provided courtesy of iTunes
Preview provided courtesy of iTunes