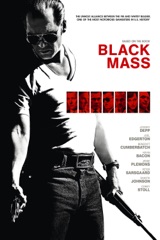 In 1970s South Boston, FBI Agent John Connolly (Joel Edgerton) persuades Irish mobster James "Whitey" Bulger (Johnny Depp) to collaborate with the FBI and eliminate a common enemy: the Italian mob. The drama tells the true story of this unholy alliance, which spiraled out of control, allowing Whitey to evade law enforcement, consolidate power, and become one of the most ruthless and powerful gangsters in Boston history.
Sometimes you can actually like the bad guy.....but on this occasion there are no redeeming features of this character.
I HATE HIM!
Johnny Depp looks mesmerising with his blue eyes and balding hair. We are told his character became more and more violent and ruthless, yet this just wasn't portrayed in the film. Just one slow scene after another.
could have been a great film, but its dull and over the place. Not one of johnny's best efforts. some directors try so hard not to make the next goodfellas, but in all honesty they should of with this story.
This film was boring it just dragged on. I was expecting a great film for some reason.
Found this to be a good story line. The only thing that made it miss off a bit was Johnny Depp limiting his facial movements. Not sure if he was covered in spray wood, but at times the character was not always believable.
This movie is amazing, and that it’s based on a true story blows my mind! Great work.
Can't recommend enough!
Firmly in the average category. We’re all familiar with this narrative: Police in cahoots with gangsters… blah blah. Really felt like I’d seen this film before. Rather slow and plodding… Only just held my attention to the end. Well acted, but not exciting enough. Avoid.
It’s a good movie, but not one of my favourites. Rather slow pace… never got too exciting.
Depp looks like a botoxed corpse in this near complete turkey. Expressionless, dead, hardly acting, it’s like a masterclass in how not to make a movie. Who knows where the director was in this low IQ ensemble. Its a shame. Like Leo in that other dreadful waste of time, The Revenant, the principles seem to completely mistake action going on around them for action going on within them, and both produce this internal deadness which, while possibly accurate to sociopaths (Black Mass) and the perpetually tired (The Revenant), leaves you and I watching something that is at the same time violent, and preternaturally dull.
Not a great fan off Jonny depp but after this film I have changed my mind loved it from the start to finish action and a great story line
Johnny Depp was unrecognisable
Found this too boring really. I like mature films with a good story but this was too boring. Couldn't finish it and that's a shame. The trailer is good, unfortunately...
This is no 'Johnny Brasko' or 'Casino' nor does it compare to half a dozen other mob related films (based on truth or otherwise). At just over 2 hours long it became a slog to keep attention fixed as there were no twists and the plot was spoon fed.
JD not a good choice for the role. Very dull and never really got going.
Great movie with Depp returning to much more gritty exciting character.. Def worth a rent in SD.
This is a great movie from start to finish don't hesitate if you like gangster movies buy this
Must watch, great story and acting by all.
AMAZING MOVIE
© 2022 Chartoo. Available on iTunes. Product prices and availability are accurate as of 30/09/2021, 08:40:41 and are subject to change. Any price and availability information displayed on iTunes at the time of purchase will apply to the purchase of this product. Apple, the Apple logo, Apple Music, iPad, iPhone, iPod, iPod touch, iTunes, iTunes Store, iTunes U, Mac, and OS X are trademarks of Apple Inc., registered in the U.S. and other countries. Apple Books, App Store, and Mac App Store are service marks of Apple Inc. IOS is a trademark or registered trademark of Cisco in the U.S. and other countries and is used under license. QR Code is a registered trademark of Denso Wave Incorporated. All other trademarks, logos, and copyrights are property of their respective owners.
DesktopTabletMobile
Improve this translation
Preview provided courtesy of iTunes
Preview provided courtesy of iTunes