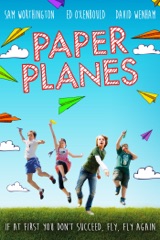 In Cinemas and on Digital HD now. Ed Oxenbould (Alexander and the Terrible, Horrible, No Good, Very Bad Day), Sam Worthington (Avatar, Clash of the Titans) and David Wenham (Lord of the Rings trilogy, Legend of the Guardians: The Owls of Ga’Hoole) star in this inspiring movie about a young boy’s passion for flight. Eleven-year-old Dylan (Oxenbould) is getting a hard time from a school bully, but when a regional paper plane tournament is announced at his primary school, Dylan soon discovers his natural talent for creating the ultimate paper plane. During a whirlwind adventure that takes him all the way to Japan for the world championships, Dylan meets the junior Japanese champion, Kimi, and they develop a close bond challenging each other to build the most beautiful paper plane ever made. Inspired by his carefree ex fighter-pilot grandfather and a kite hawk he feeds on his way to school, Dylan learns that if at first you don't succeed, fly, fly again!
Awesome movie! But more for children.
It's The Karate Kid 'without the fighting but with Flighting' pretty disappointing how predictable & run of the mill this was tbh...
Loved it. Real feel good, cute movie.Novel and entertaining theme. Well done Oz!
Planes are my favourite vehicle! Woosh, rubbish film
My name is jeff and I think paper planes is really good even know I have not seen the film it is really good thanks bye
Loved that this movie is set in Australia as it feels very different to similar American wholesome family movies. Some quirky humour makes it entertaining and the movie never drags. Great Friday night fun with young kids.
© 2020 Chartoo. Available on iTunes. Product prices and availability are accurate as of 07/02/2021, 07:41:49 and are subject to change. Any price and availability information displayed on iTunes at the time of purchase will apply to the purchase of this product. Apple, the Apple logo, Apple Music, iPad, iPhone, iPod, iPod touch, iTunes, iTunes Store, iTunes U, Mac, and OS X are trademarks of Apple Inc., registered in the U.S. and other countries. Apple Books, App Store, and Mac App Store are service marks of Apple Inc. IOS is a trademark or registered trademark of Cisco in the U.S. and other countries and is used under license. QR Code is a registered trademark of Denso Wave Incorporated. All other trademarks, logos, and copyrights are property of their respective owners.
DesktopTabletMobile
Improve this translation
Preview provided courtesy of iTunes
Preview provided courtesy of iTunes