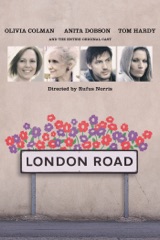 Hailed as a remarkable, groundbreaking work during two sell-out runs at the National Theatre, the feature film adaptation of London Road reunites the award-winning team, with a script by Alecky Blythe, music by Adam Cork, and directed by Rufus Norris (Broken). With an ensemble cast that includes Olivia Colman, Kate Fleetwood, Anita Dobson and Tom Hardy, London Road documents the events that shook Suffolk in 2006, when the quiet rural town of Ipswich was shattered by the discovery of the bodies of five women. The residents of London Road had struggled for years with frequent soliciting and kerb-crawling on their street. The film follows the community who found themselves at the epicentre of the tragic events, and is based on interviews conducted with the road’s real residents. Using their own words set to an innovative musical score, London Road tells a moving story of ordinary people coming together during the darkest of experiences.
This is one of the most brilliant things I have ever seen! Please read up on it before hand to understand the work gone in to it because it really is remarkable! Its heartbreaking and heartwarming in perfect compliment to one another. Give it a go, its so interesting!
I can only review the first 15 minutes of this because I stopped watching it after that. They randomly sing their lines, and not in a melodic way, it's pretentious in the extreme and only pretentious luvvies will luv it I think. It doesn't "challenge the normal conventions of narrative", it harks back to Greek chorus which isn't innovative but is challenging!
This is a seminal work from Alecky Blythe. Innovative and challenging the normal conventions of narrative. I love the mix of docu-style drama and how that becomes music. Despite the topic, I find it hugely funny! Not your average film but well worth watching.
Overly arty, and it doesn't work. Irritating, particularly because you know very quickly you have been sold a turkey. It should have stayed in the National Theatre for their own elitist audience. Awful.
Clearly lost on me - don't know why it's a musical not why they sing about everything...

© 2022 Chartoo. Available on iTunes. Product prices and availability are accurate as of 20/11/2021, 08:39:58 and are subject to change. Any price and availability information displayed on iTunes at the time of purchase will apply to the purchase of this product. Apple, the Apple logo, Apple Music, iPad, iPhone, iPod, iPod touch, iTunes, iTunes Store, iTunes U, Mac, and OS X are trademarks of Apple Inc., registered in the U.S. and other countries. Apple Books, App Store, and Mac App Store are service marks of Apple Inc. IOS is a trademark or registered trademark of Cisco in the U.S. and other countries and is used under license. QR Code is a registered trademark of Denso Wave Incorporated. All other trademarks, logos, and copyrights are property of their respective owners.
DesktopTabletMobile
Improve this translation
Preview provided courtesy of iTunes
Preview provided courtesy of iTunes