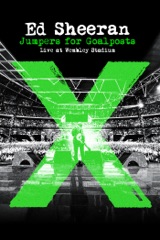 In 2015 Ed Sheeran became the first artist to perform solo at London's iconic Wembley Stadium. 3 historic nights, a total crowd of 240,000 and just one man on stage.This spectacular concert film directed by Paul Dugdale presents the story of these shows - the biggest of Ed's life.All the major hits are here, including The A Team, Don't, Sing and worldwide smash Thinking Out Loud. There's even a surprise appearance from Sir Elton John with a one-of-a-kind duet - all in front of a rapturous homecoming crowd.As well as Ed's breathtaking onstage performance, Jumpers for Goalposts intercuts the story of his triumphant road to Wembley - after millions of album sales, multiple awards and playing to audiences everywhere.The film presents a revealing and personal glimpse into life backstage, and on the road, along with honest and intimate reflection by Ed - and those closest to him - on just how far he has come.
when i bought this concert film, i thought it would just be the concert film, i was, however, pleasently surprised to find that it includes backstage access to Ed and his tour crew. really good, a lot more value for money than the album. Amazing!
I was at the Wembley arena for his first date. Was one of the best days of my life. This film helps me recapture every moment of it. Brilliant!
This film just proves how down to earth Ed is, it's great hearing his raw talent and seeing him succeed in Wembley! I Love Ed Sheeran ❤️
I was there on the first night so to see this film just brought all the awesomeness back. It's a fantastic film, well put together, with all the cheekiness of Ed shining through. No hesitation in pre-ordering this at all.
Ed is such a nice guy and his film shows that to its full extent, it is amazing to see how far he has come and ily so much!
© 2020 Chartoo. Available on iTunes. Product prices and availability are accurate as of 27/02/2021, 08:46:19 and are subject to change. Any price and availability information displayed on iTunes at the time of purchase will apply to the purchase of this product. Apple, the Apple logo, Apple Music, iPad, iPhone, iPod, iPod touch, iTunes, iTunes Store, iTunes U, Mac, and OS X are trademarks of Apple Inc., registered in the U.S. and other countries. Apple Books, App Store, and Mac App Store are service marks of Apple Inc. IOS is a trademark or registered trademark of Cisco in the U.S. and other countries and is used under license. QR Code is a registered trademark of Denso Wave Incorporated. All other trademarks, logos, and copyrights are property of their respective owners.
DesktopTabletMobile
Improve this translation
Preview provided courtesy of iTunes
Preview provided courtesy of iTunes