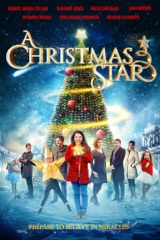 A truly special Christmas movie!
A host of film and television stars join forces to tell the magical and heartwarming story of a spirited young girl who charms her entire village. With a cast that includes Robert James-Collier, Bronagh Waugh and Richard Clements. The film is narrated by Liam Neeson and features cameos from Kylie Minogue, Dermot O’Leary, Suranne Jones, Pierce Brosnan and Julian Fellowes. Featuring the song We Can Shine sung by Zena Donnelly.
Set in the picturesque village of Pottersglen in Northern Ireland, A Christmas Star follows the intrepid Noelle who, born in dramatic circumstances under the Christmas Star, believes she has the gift to perform strange miracles. When conniving developer McKerrod threatens her peaceful village she teams up with a misfit gang of local kids to save the village from demolition. But one by one her friends lose faith in Noelle’s abilities and she is left to fight McKerrod on her own. The town’s future hinges on a final showdown in Belfast’s historic Stormont building as Noelle implores politicians, her friends and the watching world to believe in the true meaning of Christmas...love.
Fantastic piece of work coming from cinemagic and from the kids. Looking forward to the next feature #BringIt Northern Ireland to the top.
Gary Wales
Actor & Film maker
www.GaryWales.co.uk
What a super talent from some of our local, young people...my children and I loved this heartwarming film and it is well worth a visit to see it!
Absolutely love this film a great Christmas watch for all the family young and old! Well done to Northern Irelands first ever Christmas film. Great cast and love the cameos.
A wonderful and charming film that oozes the spirit of Christmas. Showcases some amazing children's talent. And lots of fun famous cameos. Thoroughly and highly recommended.
A feel good film which everyone can enjoy! Loved all the 'little' stars! 🌲🌟
A terrific film with heart as large as a house. I defy anyone not to be cheering at the end (with a lump in the throat at the same time!!)
You will see many bigger budgeted films but none with such a big heart.
© 2022 Chartoo. Available on iTunes. Product prices and availability are accurate as of 19/01/2022, 08:44:23 and are subject to change. Any price and availability information displayed on iTunes at the time of purchase will apply to the purchase of this product. Apple, the Apple logo, Apple Music, iPad, iPhone, iPod, iPod touch, iTunes, iTunes Store, iTunes U, Mac, and OS X are trademarks of Apple Inc., registered in the U.S. and other countries. Apple Books, App Store, and Mac App Store are service marks of Apple Inc. IOS is a trademark or registered trademark of Cisco in the U.S. and other countries and is used under license. QR Code is a registered trademark of Denso Wave Incorporated. All other trademarks, logos, and copyrights are property of their respective owners.
DesktopTabletMobile
Improve this translation
Preview provided courtesy of iTunes
Preview provided courtesy of iTunes