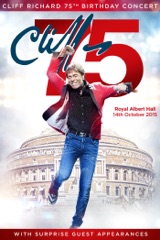 For the first time in 50 years, Cliff performs on his birthday to his fans at a packed-out Royal Albert Hall. Join the celebrations for Cliff's 75th Birthday Concert and experience one of the most emotional and thrilling performances Cliff has ever given. Filmed live in front of a star-studded audience, Cliff sings some of his personal favourites and biggest hits including; Devil Woman, We Don't Talk Anymore, Wired for Sound, Miss You Nights, The Young Ones, What Car and many more. Cliff also performs his latest release, Golden. To honour the occasion, Cliff is surprised on stage by his dear friend, comedian Paul O'Grady who leads the birthday celebrations along with some other great friends, including: Sir Elton John, Brian May, Elaine Paige, Gary Barlow and Olivia Newton John. Cliff's 75th Birthday Concert is a joyous celebration of a life in music and his personal tribute to his fans on this very special day.
This is Cliff Richard doing what he does best - performing rock n roll, live, in front of a packed audience. If you want to know why Cliff Richard has been so successful for 57 years, watch this concert and you will know why. Cliff and his band put on a superb show that will have something for everyone. By the way, I was lucky enough to be at this concert and it captured the atmosphere perfectly. Enjoy - I did!
From the moment Sir Cliff steps out on the stage to sing the spin tingling Golden which left not a dry eye in the house you know you are in for a great concert. Celebrating his 75th Birthday at The Royal Albert Hall in London with his Fans, Family and Friends. With Special guests Olivia Newton-John and Paul O'Grady coming on the stage to sing Happy Birthday and show footage from other celebrities including Sir Elton John wishing him all the best. You won't sit down with classics like Summer Holiday and Miss You Nights to the brand new track Better To Dream.
We promise you won't leave fraught.

© 2022 Chartoo. Available on iTunes. Product prices and availability are accurate as of 02/01/2022, 08:31:09 and are subject to change. Any price and availability information displayed on iTunes at the time of purchase will apply to the purchase of this product. Apple, the Apple logo, Apple Music, iPad, iPhone, iPod, iPod touch, iTunes, iTunes Store, iTunes U, Mac, and OS X are trademarks of Apple Inc., registered in the U.S. and other countries. Apple Books, App Store, and Mac App Store are service marks of Apple Inc. IOS is a trademark or registered trademark of Cisco in the U.S. and other countries and is used under license. QR Code is a registered trademark of Denso Wave Incorporated. All other trademarks, logos, and copyrights are property of their respective owners.
DesktopTabletMobile
Improve this translation
Preview provided courtesy of iTunes
Preview provided courtesy of iTunes