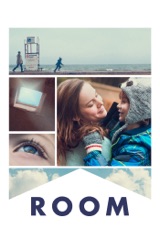 His entire life, 5 year-old Jack has only known "Room": a 10 foot by 10 foot space in which he is confined with his Ma. She has created a whole universe for him in Room, but after they escape, Jack makes a thrilling discovery: the outside world.
Amazing film that will capture you from the start. Great acting and the film makes it so real life.
And compelling
Good to watch
I was slightly wary of how a film with Room’s subject material could work. I was in fact proved wrong of any doubts.
Yes, moving is a cliché word but this film is just that! A profoundly warm and loving motion picture on the part of the maternal affection we observe but also a dark, disturbing and gripping one on the other, when one looks at the predicament. My heart has never beat as fast as it did during one of the scenes of that film!
Brie Larson’s acting fully deserved the Oscar, I’d say, and the relationship between her and her 'son’, Jack, acted by Jacob Tremblay, is evidently not just an acted one; it is a clear relationship they’d forged on set, in my opinion.
I cannot recommend this film enough with its simple yet beautiful cinematography on top of the touching views one gets from seeing everything through Jacks' eyes.
I will never forget this film.
Excellent film. Must watch!
A very moving experience
A very intense and emotional film, from beginning to end.
Worth a watch but not amazing.
Intriguing idea and well acted all round.
Didn't grip me though.
Give it a go.
This was in intense, brilliant film that kept my focus solidly for the length of the film. Some fantastic acting too. I read the book first & this film really does it justice.
I had no idea what to expect other than the tidbits through the trailer. It’s one very intense story, that is heartwarming, but also emotionally difficult at times given the theme. Some incredible acting here centred around the emotional turmoil a mother and her son experience at the hands of a terrible situation - An must see...
Love the film, it’s a must watch. Suspense filled, and heart-felt.
© 2022 Chartoo. Available on iTunes. Product prices and availability are accurate as of 03/06/2021, 08:44:19 and are subject to change. Any price and availability information displayed on iTunes at the time of purchase will apply to the purchase of this product. Apple, the Apple logo, Apple Music, iPad, iPhone, iPod, iPod touch, iTunes, iTunes Store, iTunes U, Mac, and OS X are trademarks of Apple Inc., registered in the U.S. and other countries. Apple Books, App Store, and Mac App Store are service marks of Apple Inc. IOS is a trademark or registered trademark of Cisco in the U.S. and other countries and is used under license. QR Code is a registered trademark of Denso Wave Incorporated. All other trademarks, logos, and copyrights are property of their respective owners.
DesktopTabletMobile
Improve this translation
Preview provided courtesy of iTunes
Preview provided courtesy of iTunes