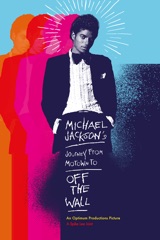 Michael Jackson's Journey from Motown to Off the Wall

Michael Jackson, the greatest entertainer who ever lived, makes his mark with his first solo album as an adult — Off The Wall — but to tell the story of this album you have to go back to the beginning. This film, directed by Spike Lee, starts with a glimpse into Michael’s evolution from the early days as a member of the Jackson Five to the point Michael decides it is finally time to release his first solo album — featuring his own music and with him having ultimate creative control. Spike then offers an in-depth look at each of the individual tracks on this seminal album, the cultural significance of Off The Wall and the impact it continues to have on today’s artists. The individuals who were interviewed for the documentary include some of today’s most important artists, e.g., John Legend, Pharrell Williams, The Weeknd and Mark Ronson, as well as other cultural icons, such as Lee Daniels, Misty Copeland, Kobe Bryan, and L.A. Reid. It is clear that the influence of The King of Pop and Off The Wall continue to be felt today.
Nowhere near on the same level as Spike Lee's previous Bad 25 documentary. This is more like a rehash of an existing 1988 well known documentary called The Legend Continues and uses a vast amount of existing footage from those interviews, including from the same talking heads conducting new interviews for this production.
There are a few instances with rare and good quality tour footage from the Destiny and Triumph tours from The Jacksons, but I can't help but wonder why more than half of the running time focuses on Motown, without going in any great depth on J5's music - choosing instead to tell us the same story that has been done a hundreds times before.
It makes no sense to do a faux focus on Off The Wall 36 1/2 years after release when the better project would be to do Dangerous later in 2016 for the 25th anniversary. Considering fans have very little footage and not a lot of insight into that album - being more recent, the influences and collaborators are likely more readily alive and available to talk. I'm sure Teddy Riley etc. would be preferable to getting overused stock footage of Quincy Jones who is reluctant to discuss his time with MJ these days anyway.
Nice documentary only thing I would say like the previous comments is that more time should have been spent on the album off the wall rather than his old stuff with Jackson 5 . Other than that he is a Legend which all artists strive to be 🎼🎤👍
He's s legend👍🏻
© 2022 Chartoo. Available on iTunes. Product prices and availability are accurate as of 16/01/2022, 08:40:16 and are subject to change. Any price and availability information displayed on iTunes at the time of purchase will apply to the purchase of this product. Apple, the Apple logo, Apple Music, iPad, iPhone, iPod, iPod touch, iTunes, iTunes Store, iTunes U, Mac, and OS X are trademarks of Apple Inc., registered in the U.S. and other countries. Apple Books, App Store, and Mac App Store are service marks of Apple Inc. IOS is a trademark or registered trademark of Cisco in the U.S. and other countries and is used under license. QR Code is a registered trademark of Denso Wave Incorporated. All other trademarks, logos, and copyrights are property of their respective owners.
DesktopTabletMobile
Improve this translation
Preview provided courtesy of iTunes
Preview provided courtesy of iTunes