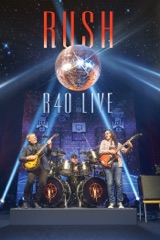 All roads have led to this. Forty-one years in the making, the R40 Live tour took a very real journey back through time. Beginning with the grand design: a state-of-the-art stage set that pivots, rolls and dives, and brings Clockwork Angels in to bombastic, colorful life before marching stridently back in time (through theatre stages, a panoply of band and fan shots, the accrued memories of a life spent playing live) to a mocked-up school gym and the band playing there; a solitary bass amp set on the chair behind Geddy Lee, a mirror ball spiraling crazily above, casting thin rods of light like a light rain across the crowd, “Working Man” coming to a shuddering halt as the band’s beginning becomes their end. Rush recorded and filmed R40 Live over two sold-out shows in the band’s hometown of Toronto at the Air Canada Centre on June 17 & 19, 2015 in the middle of their R40 Live 35-date North American tour. R40 Live had the trio of Geddy Lee, Alex Lifeson and Neil Peart, performing a career-spanning live retrospective, celebrating their 40+ years together. The epic live shows by the Rock Hall of Famers were captured with 14 cameras to present the band feature-film style. The center-point of this tour was the remarkable setlist, coupled with their idea of a “de-evolution” set design. When the band opened the show with cuts “Headlong Flight” and “The Anarchist” from their most recent studio recording, 2012’s Clockwork Angels, they did so with all the bells and whistles from that extensive tour. They worked backwards through their catalogue as the show progressed, the innovative set design making for constant visual eye-candy, as stagehands exchanged the gear and props on stage to resemble the era-correct tour staging in accordance with the songs being played. The first set featured the infamous dryers on stage while they played “Roll The Bones,” “Subdivisions,” and for the first time ever live, “Losing It” featuring violinist Ben Mink, who appeared on the original studio recording from 1982’s Signals. The second set opened with classics “Tom Sawyer,” followed by crowd favorite, “The Spirit of Radio,” but also included “Jacob’s Ladder,” which hasn’t been performed live since 1980 on their Permanent Waves tour. The last few songs of the R40 were set against the persimmon curtained theatre-looking stage, with the crowd raising their lighters and camera phones to “Closer to the Heart,” and then Alex and Geddy appeared with their signature doubleneck guitars as they played Xanadu, into the epic “2112” and encored with “Lakeside Park/Anthem” and “What You’re Doing/Working Man.” The concert film also includes the the band’s renowned tour videos, highlighted by “Roll The Bones (R40 Live),” that features an array of special guests in the rap part of the song: Jay Baruchel (She’s Out Of My League), Les Claypool (Primus), Peter Dinklage (Game of Thrones), Tom Morello (Rage Against The Machine, Audioslave), Chad Smith (Red Hot Chili Peppers), The Trailer Park Boys, and Jason Segel & Paul Rudd (I Love You, Man). It is the first time the band put the song back in the setlist since the R30 tour, a full decade ago. During the R40 Live tour, “Roll The Bones” gained new life and became a fan-favorite with an arena sing-along to the chorus “Why are we here? Because we’re here – Roll The Bones.” R40 Live audio was produced by Rush & David Botrill, and mixed by David Botrill (Tool, Muse); the film was directed by Dale Heslip, and produced by Allan Weinrib. The live photograph on the cover of R40 was shot by baseball Hall of Famer Randy Johnson, who captured the band in a rare moment when both Geddy Lee and Alex LIfeson were on Neil Peart’s drum kit riser.
If only the sound quality was as good as the picture.
I'm about 3/4 of the way through the film of the Canadian Rockers 40th Anniversary Show & its brilliant, the guys still know how to get the best out of their instruments- Geddy Lee's voice struggles a bit to get into top gear but he's in his mid 60's now but well worth £11 for almost 3 hours of music
© 2020 Chartoo. Available on iTunes. Product prices and availability are accurate as of 27/10/2019, 08:45:03 and are subject to change. Any price and availability information displayed on iTunes at the time of purchase will apply to the purchase of this product. Apple, the Apple logo, Apple Music, iPad, iPhone, iPod, iPod touch, iTunes, iTunes Store, iTunes U, Mac, and OS X are trademarks of Apple Inc., registered in the U.S. and other countries. Apple Books, App Store, and Mac App Store are service marks of Apple Inc. IOS is a trademark or registered trademark of Cisco in the U.S. and other countries and is used under license. QR Code is a registered trademark of Denso Wave Incorporated. All other trademarks, logos, and copyrights are property of their respective owners.
DesktopTabletMobile
Improve this translation
Preview provided courtesy of iTunes
Preview provided courtesy of iTunes