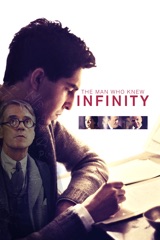 The Man Who Knew Infinity

The Man Who Knew Infinity is the true story of a genius (Dev Patel) whose theories propelled him from obscurity into a world in the midst of war, and how he fought tirelessly to show the world the magic of his mind. Colonial India, 1913. Srinivasa Ramanujan is a shipping clerk and self-taught genius, who failed out of college due to his near-obsessive, solitary study of mathematics. Determined to pursue his passion, Ramanujan writes a letter to G.H. Hardy (Jeremy Irons), a British mathematics professor at Trinity College, Cambridge. Hardy recognizes the originality and brilliance of Ramanujan's talent and despite the skepticism of his colleagues, undertakes bringing him to Cambridge so that his theories can be explored. Ramanujan leaves his family, his community, and his bride, Janaki (Devika Bhise), to travel to England. There, he finds understanding and a deep connection with his sophisticated and eccentric mentor.
This film tells the story beautifully, and the acting is amazing - I thoroughly enjoyed watching it. This film is one not to miss.
Stunning movie, beautifully acted, my favourite movie this year.
This is at once a quirky and engaging movie that captures a particular time in academia. It's also heartwarming and human and gently engaging. It's also a tragic story. And it's all based on a true story of a huge short lived Indian genius we all should know existed. I can't recommend this one enough.
Absolutely brilliant, incredible acting and a story that is worthy of everyone knowing.
This film was different and interesting to witness what this young genius of a man had the talent to discover and share with the world his gift of mathematics. Great to watch, but don't expect Good Will Hunting, because this is not it. A great true story.
Very good. Worth every penny.
Very good film.
I was interested in this film from Good Will Hunting as they mention Ramanujan in that film as an exceptionally gifted man.
This is a film about a part of his life that bought him to the worlds attention.
Very well acted by Dev Patel who seams to be growing as an actor and this time with 2 giants Jeremy Irons and Stephen Fry in support. To be honest I didn't know what to expect and although the film was good I did feel they could have tried to explain the mathematics a lot better and showed why Ramanujan has been hailed as such an amazing guy.
Good film lacks in some storyline though.
© 2022 Chartoo. Available on iTunes. Product prices and availability are accurate as of 13/01/2022, 08:51:31 and are subject to change. Any price and availability information displayed on iTunes at the time of purchase will apply to the purchase of this product. Apple, the Apple logo, Apple Music, iPad, iPhone, iPod, iPod touch, iTunes, iTunes Store, iTunes U, Mac, and OS X are trademarks of Apple Inc., registered in the U.S. and other countries. Apple Books, App Store, and Mac App Store are service marks of Apple Inc. IOS is a trademark or registered trademark of Cisco in the U.S. and other countries and is used under license. QR Code is a registered trademark of Denso Wave Incorporated. All other trademarks, logos, and copyrights are property of their respective owners.
DesktopTabletMobile
Improve this translation
Preview provided courtesy of iTunes
Preview provided courtesy of iTunes