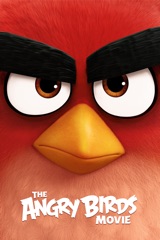 In this animated adventure comedy, The Angry Birds Movie, we'll finally find out why the birds are so angry. The movie takes us to an island populated entirely by happy, flightless birds – or almost entirely. In this paradise, Red, a bird with a temper problem, speedy Chuck, and the volatile Bomb have always been outsiders. But when the island is visited by mysterious green piggies, it’s up to these unlikely outcasts to figure out what the pigs are up to.
Like I haven’t watched it all but I’ve watched most of it. The pigs are just annoying, the birds are cool. It’s all just cringey
Love it so much and the pics are brilliant. I wonder what the second movie will be like! Why do they call King Mudbeard “Leonard” and not Mudbeard. I notice that Chuck has the same voice as Olaf from Frozen.
This is why I gave this movie this much stars! My favourites are Chuck, bomb and red. songs: explode, rock you like a hurricane, i will survive and friends. I seem to need to tidy now. BYE!
I love this film so much!! Especially since it’s got my favourite song in it!! (Yay for Imagine Dragons!!). It’s got a really good plot and I love watching it!! 💕💕
Too short, little action, but not too bad.
I remember watching the first 4 mins of this film when I rented it on google play and I truly didn't like it. I was just out of on the idea of an angry birds movie as it seemed like a gimmick to sell toys and games. I have truly done my best to avoid this movie, but finally decided to give it a watch. My gosh, this film is filing and original. It really surprised me as how good the movie was. 100% recommended this film. :)
Can be cheesy, but I love it
I saw this film yesterday very funny ,good story, I really recommend it
Awesome!
Maybe this movie will hit the spot for some viewers, but my kids and I are thoroughly disappointed. We couldn't get to see it at the cinema, so we had high hopes, but it's one of the worst written movies I've seen this year – Kung Fu Panda 3 is the weakest of that franchise, but it's still far funnier than this. With the exception of just a few slapstick moments, Angry Birds is incredibly unfunny. The plot appears to have been written by committee, understandably squeezing in elements from the game, but each tiny, paper thin joke is stretched to the limit, going on and on and on and on, even for minutes at a time, long, long after the punchline has been delivered. The animation is well done and I even like the characters and their personalities. But the writing... Take out the constant joke repetitions and extensions, many of which aren't funny even the first time round, and the whole movie would have a runtime of around 20 minutes. If you haven't seen it, rent don't buy, and ideally wait for the TV series (if there is one).
Took the kids to see this but really is made for the parents! Definitely recommend
The trailers were quite funny, but the film was somewhat disappointing, but it's a kids film and I'd say if your kids are older than 7 they'll find it a bit boring.
Such a very very great, hilarious movie. I'll treasure it 4ever.
Seb. S
funny
This was the number 1 movie I've seen so far!

© 2022 Chartoo. Available on iTunes. Product prices and availability are accurate as of 21/01/2022, 08:41:38 and are subject to change. Any price and availability information displayed on iTunes at the time of purchase will apply to the purchase of this product. Apple, the Apple logo, Apple Music, iPad, iPhone, iPod, iPod touch, iTunes, iTunes Store, iTunes U, Mac, and OS X are trademarks of Apple Inc., registered in the U.S. and other countries. Apple Books, App Store, and Mac App Store are service marks of Apple Inc. IOS is a trademark or registered trademark of Cisco in the U.S. and other countries and is used under license. QR Code is a registered trademark of Denso Wave Incorporated. All other trademarks, logos, and copyrights are property of their respective owners.
DesktopTabletMobile
Improve this translation
Preview provided courtesy of iTunes
Preview provided courtesy of iTunes