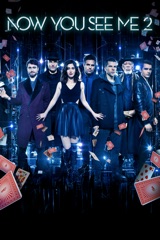 Following the box office smash hit Now You See Me, new cast members Lizzy Caplan, Daniel Radcliffe and Jay Chou join Mark Ruffalo, Jesse Eisenberg, Dave Franco, Woody Harrelson and Morgan Freeman for a second mind-bending adventure in Now You See Me 2, elevating the limits of stage illusion to new heights. One year after outwitting the FBI and winning the public’s adulation, the Four Horsemen resurface for a comeback performance. This time, they’re determined to expose the unethical practices of a tech magnate, who has threatened the illusionists into pulling off their most impossible heist yet.
Amazing movie
Definetly does not work as a sequel? What were the script writers thinking, It was a dire plot with stupid magic that didn't make any sense! Very disappointing!
Absolutely incomprehensible garbage. Makes no sense whatsoever. The worst film I’ve seen in a long time.
2 hours felt like 5
Now that’s not magic!
Very good film
In the first one I really loved it however struggled to find a plot/storyline however in the second film I found it easier to follow and it told more of a story. It also helps that both of the films have brilliant actors and actresses! If you enjoyed the first film you'll like this one even better
This is a great film, it had me gripped from scene 1. Even though I wouldn't go as far as to say that it's better than the first, the cast is far better. Overall an excellent watch, but I'd definitely recommend buying the 2-film collection.
Should have only made one movie. Standard sequel bad quality creation just to make money....
i lost a lung to atrophy watching this
It's not to bad. But as a Londoner I'm not sure we cheer quite like that.
just watch the worst film of the year
Just the worst sequel…banal trash seriously. !
First of these was really good but this one was too far fetched and too contrived to be enjoyable.
Really enjoyed the first film and watched it many times. This one try's to many times to be a comedy but fails completely. Why couldn't they leave the formula of the first film alone it would of been a winner.
It's not quite as good as the first, but still one of the best films I've seen in a while.
Really looking forward to seeing this after the first one which we rewatched a few days before but so dissapointed.
Very weak plot muddled story line, boring :-(
Hopefully this review will save other people wasting a couple of hours of their life watching this dire film
As much as I loved the first one, this second movie is complete nonsense, random action, plain ridiculous magic and just a pointless story. So disappointed.
The cast still remain entertaining but the plot is absolutely ludicrous. The use of magic also remains idiotic rather than clever. Watched it just out of curiosity but struggled to get to the end.
Good film seen it in 4K must have get your self a Panasonic ud 7004k with ghostbusters in the box in 4K 👍👻
Totally brilliant just as good as the first film
can't wait to see this again
© 2020 Chartoo. Available on iTunes. Product prices and availability are accurate as of 01/10/2019, 06:38:20 and are subject to change. Any price and availability information displayed on iTunes at the time of purchase will apply to the purchase of this product. Apple, the Apple logo, Apple Music, iPad, iPhone, iPod, iPod touch, iTunes, iTunes Store, iTunes U, Mac, and OS X are trademarks of Apple Inc., registered in the U.S. and other countries. Apple Books, App Store, and Mac App Store are service marks of Apple Inc. IOS is a trademark or registered trademark of Cisco in the U.S. and other countries and is used under license. QR Code is a registered trademark of Denso Wave Incorporated. All other trademarks, logos, and copyrights are property of their respective owners.
DesktopTabletMobile
Improve this translation
Preview provided courtesy of iTunes
Preview provided courtesy of iTunes