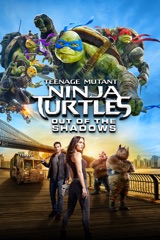 Teenage Mutant Ninja Turtles: Out of the Shadows

Michelangelo, Donatello, Leonardo, and Raphael are back to battle bigger, badder villains, alongside April O’Neil and a newcomer: the hockey-masked ally Casey Jones. After supervillain Shredder escapes custody, he joins forces with two dimwitted henchmen, Bebop and Rocksteady, to unleash a diabolical plan to take over the world. As the Turtles prepare to take on Shredder and his new crew, they find themselves facing an even greater threat with similar intentions: the notorious Krang.
This movie has the same music, sfx and naff jokes as the transformers movies Wish Micheal bay would stop destroying franchises that have such potential.
I'm a massive fan boy and I was blown away by the movie! Big improvement on the first one! Bebop and Rocksteady were awesome!
can't wait to see it and i now its gonna be awesome and much better then number 1
Much better then the 1st one and a real classic.
Some perfect throwbacks to the original film and cartoons.
A must buy
Teenage mutant ninja turtles 2 : out of the shadows (2016)
STORY
Shredder and Krang join up to take over the world, and it's up to the turtles to save the day...as well as other issues to deal with too
OPINION
Well first thing I will say is, the first movie I gave a very biased review - at the time I loved it and still do but I would grade that lower now, as we have a superior sequel - a rare thing - a sequel that's 10 times better than the first.
What's different? :
The story is stronger
The action is bigger
The comedy is funnier
The acting is better
The structure is simple
The tone is perfect
The characters get breathing ground
The score is better
The pace is fast
The turtles are in it from the start
It's a good action comedy that has a good story with great moments, I loved the new characters especially Krang and bebop and rocksteady - the new shredder is also better! It feels like a ninja turtles movie, it's basically a live action remake of the cartoon and it works!! This blows the first film out the water.
The film has a very strong fast paced feel to it - it starts very strong from jumping from building to building to basketball games to carnivals to car chases etc etc it has a good middle where the conflict and development of the turtles take place - very interesting and loyal to tmnt themes, it has a busy second half too (no spoilers) and ties up very well.
It's not perfect tho, it has flaws, it's not a perfect movie, however praise must be given for the work of making it better - attempting to improve and succeeding meaning they are heading in the right direction
It's the biggest ninja turtles movie ever and it's my second favourite turtles movie - the 1990 original will always be my personal fave, but this is a close second
Now then critically this is a 7/10 - it's not bad at all, most people seem to like it and critics can go sit in the critics corner and point fingers at what they don't like, as turtles isn't the sort of film to get oscars or awards.
I however grade this movie a 10/10 because I loved it - it was what the first film should have been - a fun fast paced entertaining funny blockbuster with a easy going good story
Cowabunga says it all
OVERALL. 10/10.
NINJA TURTLES MOVIE BIASED SCORES
Ninja turtles 1990 movie. 10/10
Ninja turtles secret of ooze. 8/10
Ninja turtles 3 7:10
TMNT. 7/10
Ninja turtles forever. 7/10
Ninja turtles 2014. 8/10
Ninja turtles out of shadows. 10/10
© 2022 Chartoo. Available on iTunes. Product prices and availability are accurate as of 25/11/2021, 08:40:56 and are subject to change. Any price and availability information displayed on iTunes at the time of purchase will apply to the purchase of this product. Apple, the Apple logo, Apple Music, iPad, iPhone, iPod, iPod touch, iTunes, iTunes Store, iTunes U, Mac, and OS X are trademarks of Apple Inc., registered in the U.S. and other countries. Apple Books, App Store, and Mac App Store are service marks of Apple Inc. IOS is a trademark or registered trademark of Cisco in the U.S. and other countries and is used under license. QR Code is a registered trademark of Denso Wave Incorporated. All other trademarks, logos, and copyrights are property of their respective owners.
DesktopTabletMobile
Improve this translation
Preview provided courtesy of iTunes
Preview provided courtesy of iTunes