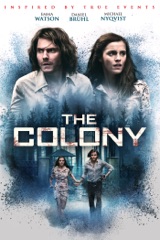 Inspired by true events, The Colony tells the harrowing true story of Lena and Daniel, a young couple, who become entangled in a Chilean cult in 1973. When Daniel is brutally abducted by the military's secret police, Lena embarks on a desperate search for her boyfriend. She tracks him to Colonia Dignidad – an infamous compound run by a sinister preacher with an iron fist, Paul Schäfer. Offering herself up as a follower, Lena decides the only way she can free Daniel is to infiltrate the cult. But can she herself survive Colonia’s vicious regime?
Directed by Academy Award ® winner Florian Gallenberger, this powerful thriller is inspired by true events and stars Emma Watson (Harry Potter franchise), Daniel Brühl (Rush, Good Bye Lenin!) and Michael Nyqvist (The Girl with The Dragon Tattoo, John Wick).
emma watson being emma watson again, so little vairation in her acting, absolute rubbish film
Weird and very hard to believe this ever happened?
Odd right through with wooden acting by all involved.
Utter tosh!
Good solid film - primariily a drama, acting was fair, script could have been much stronger and did not give the good actors enough to work with.
Wonderful acting, super story which is shocking to know is based on true events! A real nail biter!
Fantastic film - cold gripping drama...shocking that its based on true events.
Tight budget production. Poor acting, storyline not developed enough.
Wow this film was great! Really keeps you engaged and some tense moments!!
A very powerful and harrowing film. Really good chemistry between the two leads as well.
Edge of your seat real life thriller. Really enjoyed this one.
This film is so important to watch, refreshing to see such a relevant story based on the true events surrounding Colonia Dignidad. Was completely shocked to learn the colony still exists in Chile! I think Emma Watson brings her best performance yet. This is a an unexpected gem of a thriller!
Really enjoyed this, bit like Shawshank Redemption, gripping and tense
What an important film! An unbelievable true story. I'm still thinking about it 2 days later.
What are these 5stars on? Wooden acting, lightweight story, music score was laughable. Deleted post 20 mins
Best film I've seen this year.
Watson is amazing and nyqvist is the best villain of the year.
This is a great thriller with really good tension throughout and strong performances from the leads. Great to see Emma Watson in her first adult role. Based on a true story, it is hard to believe this really happened - and you'll be on the edge of your seat at the end.
A fantastic film highlighting the awful events whch took place at Colonia Dignidad. Emma Watson is brilliant!!
Daniel Bruhl and Emma Watson are amazing in this thriller based on true events. An eye opening Film (I immediately started researching after) about a truely harrowing place I had never heard of before. Intense and gripping - loved it
This was brilliant! A very tense and well acted thriller. I would say this is Emma Watson's best performace yet.
What an incredible story, I couldn’t believe this is based on true events… Great edge-of-your-seat thriller and amazing performances from Emma Watson and Daniel Bruhl! Highly recommend.
My favourite film of the year so far. Shocking and impactful storyline with some amazing acting from Emma Watson and Daniel Bruhl. I highly recommend
© 2022 Chartoo. Available on iTunes. Product prices and availability are accurate as of 16/01/2022, 08:41:16 and are subject to change. Any price and availability information displayed on iTunes at the time of purchase will apply to the purchase of this product. Apple, the Apple logo, Apple Music, iPad, iPhone, iPod, iPod touch, iTunes, iTunes Store, iTunes U, Mac, and OS X are trademarks of Apple Inc., registered in the U.S. and other countries. Apple Books, App Store, and Mac App Store are service marks of Apple Inc. IOS is a trademark or registered trademark of Cisco in the U.S. and other countries and is used under license. QR Code is a registered trademark of Denso Wave Incorporated. All other trademarks, logos, and copyrights are property of their respective owners.
DesktopTabletMobile
Improve this translation
Preview provided courtesy of iTunes
Preview provided courtesy of iTunes