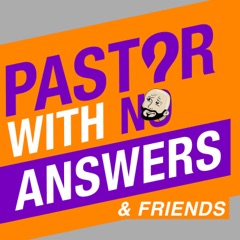 Pastor With No Answers Podcast

Joey Svendsen (formerly of BadChristian Podcast) is a pastor who threw out his list of theological “certainties,” embraced mystery, and found freedom. Growing up a fundamentalist evangelical Christian, he now explores faith through a progressive lens. But Joey cares more about people than their positions, and remains closely connected with evangelicals, including many of the staff and attendees of the church where he pastors. Join Joey, his regular commentators and many special guests (progressives, traditionalists, evangelicals, and the totally indifferent) as they discuss God, the Church, cultural issues and anything else that has grabbed Joey’s attention. You’ll also hear honest and unfiltered discussions about stories of tragedy as well as Joey’s own experiences with mental illness. Joey likes to keep the conversations friendly but doesn’t pull punches, and doesn’t hesitate to explore potentially offensive topics. Maybe you love Jesus but aren’t so sure about the church thing, or maybe you’ve got the Heidelberg Catechism tattooed on your forearm – this is a podcast dedicated to coming together in love to talk about the things we all care deeply about but sensitive ears, you’ve been forewarned.

https://feeds.buzzsprout.com/1511929.rss
He left them for good reason. He is the Canada to their United States of America.
Love Pastor with No Answers. I came looking for answers and left with none! LOL! Just kidding, really great food for thought from Joey and his guests. Keep up the good work!
Love the transparency, great podcast

© 2022 Chartoo. Available on iTunes. Product prices and availability are accurate as of 28/09/2021, 08:57:58 and are subject to change. Any price and availability information displayed on iTunes at the time of purchase will apply to the purchase of this product. Apple, the Apple logo, Apple Music, iPad, iPhone, iPod, iPod touch, iTunes, iTunes Store, iTunes U, Mac, and OS X are trademarks of Apple Inc., registered in the U.S. and other countries. Apple Books, App Store, and Mac App Store are service marks of Apple Inc. IOS is a trademark or registered trademark of Cisco in the U.S. and other countries and is used under license. QR Code is a registered trademark of Denso Wave Incorporated. All other trademarks, logos, and copyrights are property of their respective owners.
DesktopTabletMobile
Improve this translation
Preview provided courtesy of iTunes
Preview provided courtesy of iTunes