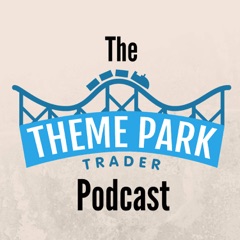 Join your hosts Ryan and Dan as we discuss news and events from theme parks from all around the world!

https://themeparktrader.podbean.com/feed.xml
Enjoyed listening to this until a joke was made about being left legless on the smiler rollercoaster..... not impressed and will not recommend at all now
Found this podcast by chance. I thought I was going to be listening to some geeky ramblings hearing about social distancing in the queue line on Wicker Man. It’s actually two lads who have produced a great podcast. They’re relaxed, have a great natural chemistry, and present with great humour, I found myself giggling along with them. It’s like listening to two of your mates talking about Disneyland - highly recommended.
When i get the chance to listen this podcast is alright but more often than not the presenter is too hung over to release it on time and the whole show breaks down...1 star.
Only joking great fun. mostly disney and universal focussed but thats no big thing as coaster specific podcasts are kinda dull just talking about coaster stats. These guys talk more about the park experience overall, resorts, food and alcohol available. but mainly food.
Absolutely great podcast
One of the best podcast out there
Good honest discussions a very enjoyable and easy listen
I love their reviews, discussions and their reading of bad trip advisor reviews - fantastic to listen to while at work 👌🏽
It’s not often you find a podcast that whilst bringing you information also injects so much humour that you find yourself laughing out loud in public whilst alone. I have subscribed to the YouTube channel too. I cannot recommend these guys highly enough. Thanks guys.
These two make me laugh show upon show.
They provide the best round up of news but don’t dwell on it as they prefer to get into their shows topic which they often get the public to help out with.
Listening to this on a commute is dangerous as it can make me laugh out loud which does get me strange looks!
They respond to messages and comments unlike others.
Bonus star for their theme music at the start of the podcast.
The only negative? It does make you wish you were going to Florida all the time!
Keep up the good work!
Such a nice change from the norm. This is so worth your time. Thanks team
A nod along podcast, non offensive but generally of no substance.
If you want to hear the same generic opinion, and only on the larger parks in Orlando, then this listen might be for you.
In a recent episode they reviewed the water ride Dudley Dos, at Islands of Adventure, neither host had ridden the ride, but went from a negative review, then positive, and back to negative, for no reason! And no mention of universal having to re-shape the final drop! A huge lack of general knowledge.
They also compared the Dr Doom Fearfall ride at Islands of Adventure, which neither host had ridden, to another ride they had neither had ever ridden; both unfavourably. This is not a way to write a review!
Being confident (they think!) about Orlando, but having missed out on the finer parks is so sad.
Which parks? Europa Park, Phantasia, Efteling, just to name a few in Central Europe.
It’s all duplicated content from a source with a lack of authority.
So much potential, but the boys lack going on an actual adventure.
These guys are great the variety of content is awesome. Poor reviews, good reviews, trip reports, news, uk parks, us parks you name it these guys can cover it. Awesome show keep up the great work
I have been listening to Ryan and Dan religiously for the past few months and now I look forward to Monday’s for my weekly dose of Orlando/Disney news and reviews. The episodes with the bad reviews from trip advisor always make me laugh. Keep up the great work guys!
2 boys & a cup! I love these guys & their relaxed style of podcasting. Sitting in their bathrooms in their pants is what it's all about. Keep it going boys
A great listen for your Disney / Universal addictions!
Currently on Ep 20. Working my way through ready for trip to Orlando in July. It sounds great ( apart from the toilet Ep when Ryan moved house 🤣). I enjoy their witterings and updates on all the news from US and beyond. They not only talk about Disney but other theme parks in U.K. Keep up the good work. Please keep having guests on it adds a little something extra to an already great listen. 👍
Great podcast about (mainly) Disney World but others included from a brits point of view. Will be joining the forums tonight
I love this podcast, such a fun and banter filled podcast! Ryan and Dan are great at what they do! Can't wait for our little collaboration
Top podcast here from a couple of gents, lots of serious reviews of various parks and their recent changes and additions, also pretty banterous.
Great podcasts, only just started listening but can't wait to hear more :)

© 2022 Chartoo. Available on iTunes. Product prices and availability are accurate as of 20/06/2022, 09:28:19 and are subject to change. Any price and availability information displayed on iTunes at the time of purchase will apply to the purchase of this product. Apple, the Apple logo, Apple Music, iPad, iPhone, iPod, iPod touch, iTunes, iTunes Store, iTunes U, Mac, and OS X are trademarks of Apple Inc., registered in the U.S. and other countries. Apple Books, App Store, and Mac App Store are service marks of Apple Inc. IOS is a trademark or registered trademark of Cisco in the U.S. and other countries and is used under license. QR Code is a registered trademark of Denso Wave Incorporated. All other trademarks, logos, and copyrights are property of their respective owners.
DesktopTabletMobile
Improve this translation
Preview provided courtesy of iTunes
Preview provided courtesy of iTunes